County Aims to Prevent Substance Use and Abuse
Votes

County Aims to Prevent Substance Use and Abuse

Alcohol use down, painkiller and inhalant use on the rise. 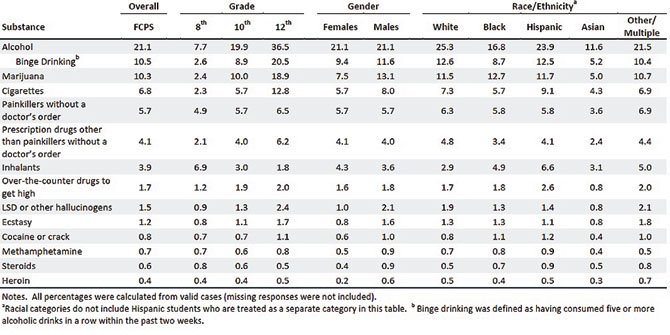 Percentage of students reporting use of selected substances in the past month, according to the 2010 Fairfax County Youth Survey.

The Unified Prevention Coalition will present "The Perils of College Drinking Culture," a program designed to educate students and parents about the realities of binge drinking on college campuses. The presentations will include a screening of the award winning documentary "Haze," as well as a question and answer session with a panel of law enforcement, medical and legislative personnel.

The programs will take place:

All programs will be from 7 to 9 p.m. More information can be found at http://www.unifie...">www.unifiedpreven....

Twenty-one questions in the 2010 Fairfax County Youth Survey dealt with substance abuse. The survey asked about lifetime use of alcohol, marijuana and cigarettes, as well as use in the past month of 13 different substances.

According to the survey, the most frequently used substance by Fairfax County students is alcohol, with 45.5 percent saying they had consumed it in their life, 21.1 percent reporting use in the past 30 days and 10.5 reported drinking five or more drinks in one sitting. While all those numbers are below the national averages, several community groups are at work trying to get them even lower.

"Quite simply, alcohol is a danger to their future," said Diane Eckert, executive director of the Unified Prevention Coalition of Fairfax County, which recently received a $200,00 state grant to reduce underage drinking. "Once you start drinking at a young age, you’re priming yourself to become dependant as you grow older, which of course we don’t want."

Lifetime alcohol use in the county has decreased since the 2001 Fairfax County Youth Survey by 13.8 percent across all grades.

Access is a key part of the prevention mechanism, since students are under the age of 21 and cannot purchase it themselves. Many community groups reach out to places where alcohol is sold to increase awareness of the consequences of providing alcohol to minors.

"We participated in Operation Sticker Shock, which marks beer and wine at grocery stores with "Stop" signs to discourage shoppers from purchasing them for underage children," said Debbie Witchey, president of the Safe Community Coalition, which served the Langley and McLean High School pyramids. "We also held a program where fifth and sixth graders wrote notes to juniors and seniors attending prom, reminding them that they are role models and asking them to make responsible decisions, especially when it comes to drugs and alcohol."

Prescription drugs, particularly opioid painkillers, are a concern for the community since they can be readily available in students’ homes. Painkiller use has risen from 4.9 percent reporting use within 30 days in the 2009 survey to 5.7 percent in 2010. Non-painkiller prescription drug use has also risen from 3.9 percent within the last 30 days in 2009 to 4.1 percent in 2010.

"Prescription drugs abuse wasn’t even on our radar a few years ago, now it is because of the youth survey," Eckert said. "We know we have to develop more awareness, because a lot of parents aren’t aware of the effect an unlocked medicine cabinet can have on teenagers."

The rise has led to county-sponsored prescriptions drug drop-off events several times a year, where residents can bring medicine that is no longer needed to county facilities for proper disposal.

According to the survey, prescription drugs were the only non-alcohol, tobacco, inhalant or marijuana substances used by more than 1.7 of the students. Other drugs surveyed include LSD, ecstasy, cocaine/crack, methamphetamine, heroin and steroids.

Inhalants are another area of concern, particularly because Fairfax County’s usage statistics are higher than the national average in all grades. Any fumes or gas that is inhaled to get high falls under this category, which can include household items such as glues, aerosols, butane and solvents.

According to the survey 6.9 percent of eighth graders reported using inhalants in the past 30 days, while the number dropped to three percent in 10th graders and 1.8 percent in 12th graders.

"The survey has shown inhalant use starting at a younger age, which means we have to make sure to check for it at a younger age," said Capt. Bruce Ferguson, commander of the Fairfax County Police Department’s Youth Services Division. "They’re another one of those substances that can be found at home, so it’s more difficult to control access, and can be something younger students try and experiment with."

Eckert also said the UPC focuses on marijuana use because "the perception of harm and parental disapproval seems to be going down, and that usually leads to usage numbers going up."

Coalitions like the Unified Prevention Coalition and the Safe Community Coalition are working on new ways to spread awareness of the dangers of substance abuse. Dr. Bill Geary of the Community Anti-Drug Coalitions of America recently spoke to school officials, police, parent organization leaders and coalition members about how to approach the problem.

"We use a Strategic Precognition Framework that’s based on the Public Health Model, where we look at the agent as the substance that causes the change and the host as the people who use it," he said. "The point at which the host interacts with the agent is a problem, but if that was the only one, we’d only need prevention programs. But we also have to look at the environment, and some are easier than others when it comes to allowing the host to interact with the agent."

Geary said that programs, while often a part of a comprehensive prevention strategy, coalitions play a more central role in what he called "community level change," which requires looking at the whole picture, the host, agent and environment.

"If the goal is to spread change to impact the maximum amount of people, then a community level change is most likely with a comprehensive community coalition," he said. "A coalition does not just run programs, but they oversee and implement what role programs might have in that strategy. Coalitions are in a unique position because it means no one single agency is in charge of everything."