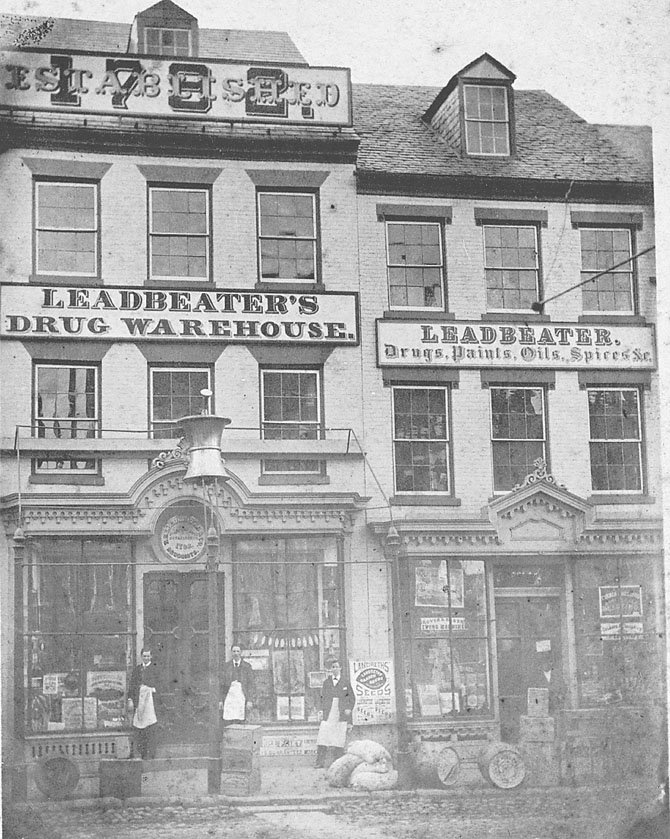 The apothecary displayed only the Leadbeater name in this c. 1890 photograph.

Alexandria — Martha Washington was ailing terribly in April 1802. Searching for help in that era of primitive medicine, she sent a man with a note to an apothecary in Alexandria. “Mrs. Washington desires Mr. Stabler will send by the bearer, a quart bottle of his best castor oil, and the bill for it.” Sadly, the treatment did not improve her health and she died the following month. 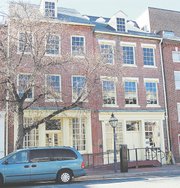 Today the facades and entrances of the two buildings are simpler than before, but other details remain the same.

Edward Stabler opened his apothecary in Alexandria in 1792, and four years later moved to 107 South Fairfax Street. As the business thrived, Stabler expanded next door into number 105. Son William carried on when his father died in 1831 and welcomed his brother-in-law John Leadbeater into the firm. Upon William’s passing in 1852, Leadbeater bought the firm from the widow Stabler and gave it his own name.

The Stablers and Leadbeaters manufactured and sold medicines and nostrums, as well as medical and dental equipment, soap, cigars and combs. In the years after the Civil War, the firm sold supplies to hundreds of pharmacies in the Washington area, and operated out of several buildings in the city

The firm’s business slowed in the first 30 years of the 20th century. The emerging national drug industry changed how physicians and patients obtained and used both over-the-counter and prescription drugs and medicines. The mom-and-pop operations faded. Edward S. Leadbeater, Jr. filed for bankruptcy in 1933 just before he died.

The Landmarks Society of Alexandria soon bought the buildings, and the Friends of the American Pharmaceutical Association purchased the remaining inventory. The Landmarks Society later gained control of everything and opened a museum in 1939. hat group donated the facility to the city in 2006. See the museum’s website for more information: www.apothecarymuseum.org.