Next: Odyssey of the Mind World Finals in Iowa. 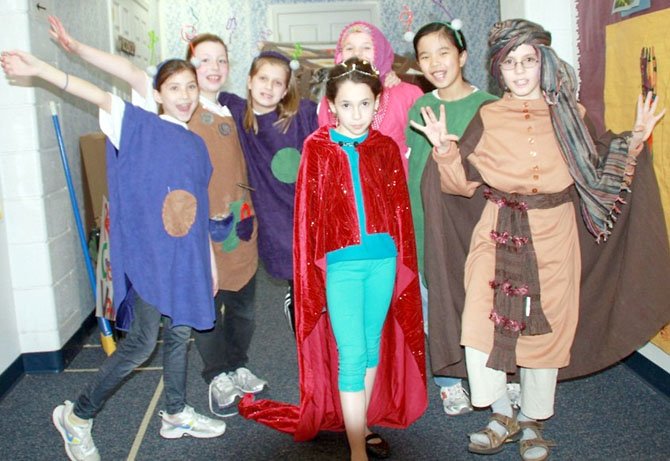 Students from Bells Mill Elementary School will participate in the Odyssey of the Mind World Finals in Iowa in May.

A team of third and fourth graders will represent Bells Mill Elementary School at the Odyssey of the Mind World Finals in Iowa this May. Alyssa Gabidoulline, Elizabeth Li, Ben Lojacono-Evans, Ellen Newbold, Cece Price, Carina Rosenbaum, and Margaret Tilmes recently won first place for their solution to the NASA-sponsored challenge at the annual Maryland State Odyssey of the Mind Competition.

Over the next few weeks, the team will be preparing to go to the World Finals in Iowa, where some 900 teams from all 50 states and 25 other countries will participate.

“It is good for kids to see that great opportunities open up when they work hard. It’s also great to see girls working as scientists. We’re proud of the team and wish them well at Iowa,” said Bells Mill Principal Jerri Oglesby.

The Bells Mill team chose the NASA-sponsored “Weird Science” problem. They had to pick a NASA satellite picture of one location on Earth and develop an imaginative story about “mysterious events” happening at that site. A team of scientists needed to travel to the location to investigate the mystery. Their solution had to be presented in a performance scored on technical and style elements and lasting no more than eight minutes, within a budget of $145 or less.

After much debate, the team chose a NASA picture of the Richat Structure. Known as the “Eye of the Sahara,” the Richat Structure is an ancient volcano that collapsed into a perfect spiral in the Sahara Desert. The team pictured the structure as a giant snail and decided that a team of “snailien” scientists might be sent on a mission by their queen to find life similar to their own in the Milky Way galaxy. After an adventurous trip across space they decide to go investigate the “giant snail city” in the desert. There, the “snailien” scientists have an exchange with a Bedouin “Dad” who knows the ancient legends and his modern, educated Bedouin daughter who teaches them the science behind the Richat Structure in Mauritania.

To stay within their budget of just $145, the team turned a large aquarium box into a spaceship; painted paper tablecloths to make wormholes, black holes and planets for sets, built a model of the Richat Structure using papier-maché and used silly straws as antennae and remnant cloth sewn to make costumes.

Coach Sheila Heslin said, “It was a lot of fun working with this dynamic and determined group of kids. They worked hard, meeting several days a week for the past two months. They learned how to work together, support each other, and perform in front of an audience. They really expanded their horizons and experienced a true odyssey of exploration.”

Bill Klein received the Omer Award and named Maryland’s Odyssey of the Mind Coach of the Year, for his efforts to bring Odyssey of the Mind to Bells Mill Elementary and Cabin John Middle School. Klein said that, “"It's a great experience. When kids finish performing and realize what they’ve done with just their creativity, teamwork, and determination, they experience a tremendous sense of accomplishment and pride, whether they win or not. I am glad to see Odyssey of the Mind taking root here."

Over the coming weeks, the Bells Mill team will be working hard to raise funds to cover their expenses, including for transportation, lodging and registration. Any contribution to help defray costs would be appreciated. Checks can be made payable to Bells Mill Elementary School, with “OM” in the memo section. Donations are tax deductible.