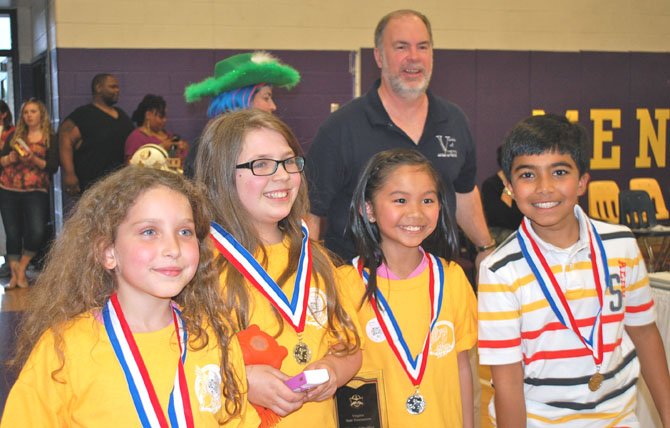 The Forestville Elementary Odyssey of the Mind team won at the Virginia State Finals in Newport News on Saturday, April 14, and will be competing in the 2012 World Finals being held May 23-26 on the campus of Iowa State University.

Teams from all over the United States and from approximately 25 other countries participate in Odyssey of the Mind. The program also will be hosting a Eurofest in Russia at the end of April for teams from approximately 15 countries. The decades old program describes itself as an international educational program designed to teach life-long problem solving skills, emphasizing working in a team, productive creativity and the philosophy that there are no wrong answers to the competition’s open-ended problems. The program includes both long-term problem solving on which a team works in preparation for the competition, as well as short-term spontaneous problem solving at the competitions.

The Forestville team competes in Division 1, the division for grades kindergarten through fifth grade in the U.S. and in countries with similar educational structures, or for students who are younger than 12 years old from other international countries. They compete against other Division 1 teams who have chosen the same problem to solve: a musical and theatrical interpretation of the Classics problem presented by William Shakespeare in the play "Hamlet". The Forestville team is made up of two third graders, Sarina Bell and Daniel Silvestri; three fourth graders, Aditya Khera, Caroline Keys, and Sydney Pham; and two fifth graders, Gwyn Murphy and Lawrence Kang; and is led by Jeffrey LeLoup, a third grade Advanced Academics Program classroom teacher at Forestville. LeLoup is or has been the classroom teacher for all of the team members. He is assisted as coach by Alexandra Newman, a journalist and adjunct professor for journalism at American University.

Before the start of the 2011-2012 academic year, it wasn’t certain that Forestville would be fielding a team at all. Vanitha Khera, the parent of fourth grader, did volunteer to act as chairperson, despite the demands of running a Federal IT consulting company that she had newly formed. She says that she could not have taken on the role of chairperson for the Forestville team without the support of her husband, Vishal Khera. Team members and other parent volunteers were recruited; and in November 2011, LeLoup and fellow coach Newman began team practices on Saturday mornings in the basement of the Khera family’s home. The Regional Tournament for the northern sections of Fairfax and Prince William counties was held on March 31 at Langley High School. From there, the winning Forestville team went on to the Virginia State Finals held in Newport News this past Saturday, April 14.

Aditya Khera says, "Most of the students and coaches were first timers and really worked very hard - but had a great time putting the show together. All of the team members have been in Jeff's class and have had . . . experience with creative ways to make presentations. He has a unique way of making Social Studies fun in 3rd grade by having the entire class make a movie . . . This helped the team tremendously with stage presence, dialog writing, timing and using humor to their best advantage. And the best part was, they had so much fun during the whole process!. . .The judges at the competitions, at both Regional and State, noted the very talented group of young artists we have in our team, who enthralled the audiences and judges with their performance."