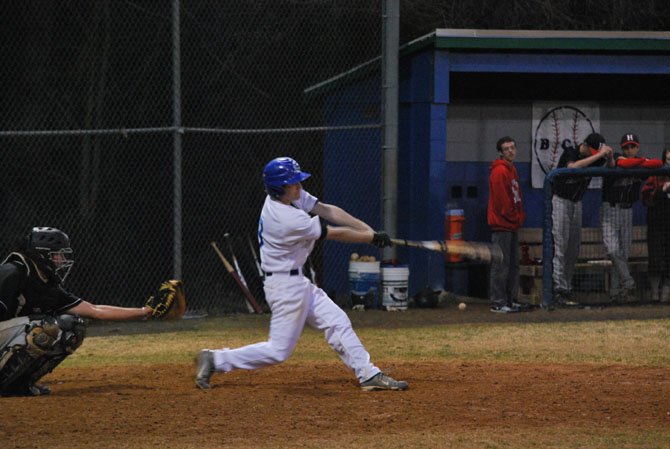 The Seahawks' first game in South Carolina was Monday night, April 2. They opened the tournament with a big win over the host team, the Bluffton Bobcats, by a 9-3 score at Johnson Stadium.

With the temperature at 90 degrees for the first pitch of the 7 p.m. game, the Seahawks got off to a hot start with an early run in the first inning thanks to a deep fly by senior Billy McLaughlin, who eventually scored on a wild pitch. The Seahawks added four runs in the third inning, thanks to key hits by McLaughlin and senior Austin Schweppe, along with two errors by the Bobcats.

Freshman catcher Jared Abelson was active behind the plate snagging multiple foul pops. Solid defense was displayed throughout most of the game by the Seahawks, including several running catches by junior left fielder Hayden Hall, a lunging grab by sophomore Josh Forrest on a line drive to start the third inning, and a game-ending unassisted double play by senior shortstop Ryan Forrest.

THE FOLLOWING morning saw the Seahawks pick up another win - an 11-9 victory over the Whale Branch Warriors from Seabrook, S.C. For the second straight game, South Lakes scored in the first inning without a hit, benefiting from six straight walks which resulted in three runs. All of the runs came with two outs. After the Warriors took a 4-3 lead in the third inning, their erratic pitching continued and the Seahawks regained the lead after two more walks and a clutch two-run single by Billy McLaughlin.

The back-and-forth game continued in the fourth inning after Whale Branch tied it before South Lakes broke the game open with five runs, thanks to key hits by juniors Austin Gibbons and Hayden Hall and an RBI double by McLaughlin. The rally prompted the first `wave' of the season by the Seahawk faithful in attendance for the morning game. The Warriors crept back in and pulled within 10-9 before South Lakes tacked on another run after singles by juniors Noah Rubin and Glenn Mitchell. Reliever Bobby Rae Allen shut down the opponents in the seventh inning for the second straight day, allowing no runs to cement the win.