No Butts About It: Ramparts Shifts to “No Smoking” Policy
Votes

No Butts About It: Ramparts Shifts to “No Smoking” Policy 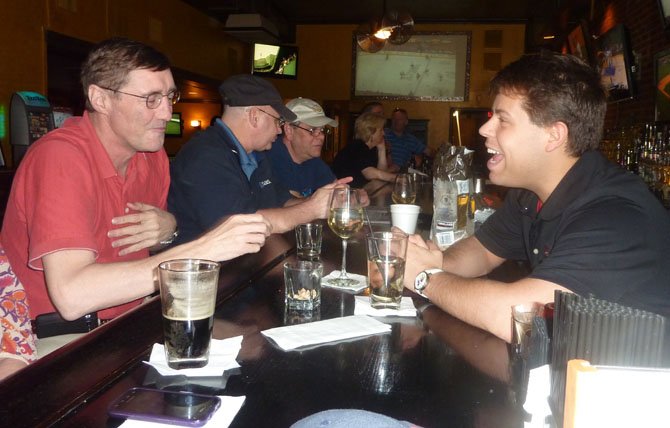 Alexandria — The gang of regulars at Ramparts had a friendly wager going: How long would it take Butch Shunk to return after his vow to never again set foot in the popular Alexandria watering hole after its sudden shift to a no smoking policy on Easter Sunday? Some said three months but in the end it only took three days for the loyal customer to be back in his customary place at the end of the bar.

“I really had no intention of coming back,” said Shunk after taking some good-natured ribbing from his friends. “But I've been coming here for 26 years so I decided to just try to adjust.”

Virginia's statewide restaurant smoking ban took effect Dec. 1, 2009, but Ramparts instead went to considerable expense to install a specialized air filtration system that allowed it to keep its smoking license, one of the few remaining in Northern Virginia.

“We're not going to give up our license,” said Ramparts manager Jonathan Jackson. “But we've been thinking about going to a no-smoking policy for some time now and decided this was the time to do it.”

Some customers said that negative reviews on the website Yelp.com prompted the sudden decision to ban smoking.

“It's like the eBay rating system for sellers,” said Holly Burnett of the online review website. “Those reviews are important but on Yelp, anyone can go on there and say whatever they want. There's no way of knowing if the complaints are legitimate or coming from a disgruntled competitor.”

A check of recent reviews on the website did produce a few anti-smoking comments as well as some pro-smoking support, which, according to Jackson, did not affect the final decision.

“We do read everything that is posted there,” Jackson said. “Customer reviews are very important to us but at the end of the day it was our decision to go no smoking.”

As required by state law, Ramparts had maintained a separate smoking section with its own entrance.

“We really love our neighborhood and our neighbors,” Jackson said. “I hope people came here not just to smoke but for the familiar faces, food and atmosphere.”

Gary Holme, a former smoker and 18-year patron of Ramparts, is happy with the decision.

“I hope people don't hold this against Ramparts,” Holme said. “They went out of their way to help smokers but it's a business decision and is for the best for everyone.”

As for Shunk, he shrugged his shoulders as he settled into a chair and lit up a cigarette outside Ramparts.

“What are you going to do?” Shunk said. “It's the coming thing everywhere. Everyone knows that.”