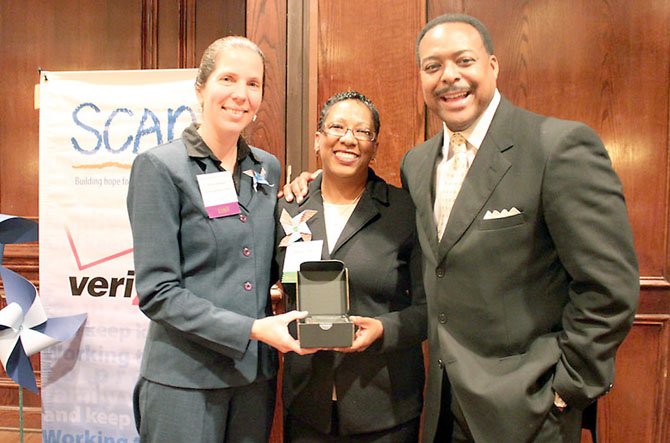 "These are the people making the news we want to report," said ABC7's Leon Harris, who emceed the event along with fellow news anchor Alison Starling.

In 2008, with his brother Isaac, King founded the Capital Youth Empowerment Program, or CYEP. A probation officer in Arlington County, he is also a local business owner. He and his brother saw a void in the community when it came to treatment options for fathers involved in domestic violence, CPS and child abuse and neglect cases. Investing their own money and time, the brothers made a commitment to make a difference through CYEP’s Fathers In Touch Program, which provides a 12-week fatherhood class along with three coordinated group activities — at no cost to families — to help dads find support from their peers and strengthen their parenting skills.

Less than four years since its launch, King’s program has helped more than 200 children and families in Alexandria and Fairfax. His private company, King Brothers & Associates, has also provided affordable housing for families previously in low-income housing projects or homeless shelters. In 2010, CYEP won the NAACP Community Service Award in Alexandria and Fairfax. Earlier this month, the Northern Virginia Urban League honored King with the Next Generation of Leadership Award.

CUFFEE is a woman on a mission for prevention. Over the course of her nearly 30-year career in child and family welfare, she has handled the variety of overwhelming, complex and changing needs of abused and neglected children. She began her career as a social worker in Arlington, and by her recent retirement, she had served over a decade as the division chief for the county’s Child and Family Services Division. She played a critical role in the establishment of Arlington’s Child Advocacy Center as well as Project PEACE, a coordinated community response to domestic violence.

Cuffee is especially proud of her work to collaborate with what she calls “critical partners,” including everyone from citizen groups to the Police Department to the courts to the public school system. "I show children and parents that they are valuable by respecting every family member, listening carefully to what each member considers the issue or problem, meeting each person where they are, and asking each what he or she would like to accomplish or change," she said. "Then I determine how to best educate and intervene to ensure safety, reduce risk factors, restore relationships when indicated, and promote healing. Feeling valued and supported empowers and equips families to seek essential knowledge and gain specific skills to improve their situation more readily and prevent new occurrences of abuse and neglect."

HULL empowered those around her to make real change, even in the face of the greatest obstacles. Hull was executive director of United Community Ministries for the last five years, a time of unprecedented financial strain on public and private resources. But her belief in UCM’s impact — as the organization served over 13,000 children and adults every year — helped her to educate others about the necessity of UCM programs like Healthy Families. UCM is the primary safety net for families in crisis in southeastern Fairfax County, tackling issues from precarious housing situations to hunger to emergency medical assistance.

Hull’s understanding of the complexities of families in crisis guided her work to strengthen programs so they could more effectively handle family relationships, mental illness, substance abuse and poverty — all issues with deep ties to child abuse and neglect. She also played a key role in bringing together local nonprofit leaders to pool resources and prioritize critical programs. Throughout her three decade-long career, which included leadership roles at Offender Aid and Restoration (OAR) in Arlington and Fairfax, Hull promoted issues of justice and the value of every program participant’s life.

“Cynthia is a women who believes in a shared humanity that binds us all together,” wrote UCM Board President Douglas J. Kennett, in a recent letter to the editor. “For Cynthia, this humanity underscores the responsibility that all of us have to work together towards a better community, in particular for those who need help to move from poverty, hunger and homelessness to a life of hope and greater prosperity."

With support from Verizon, SCAN held the event to kick off its 2012 Northern Virginia Child Abuse Prevention Campaign, The Little Picture, and to recognize the heroes who are committed to protecting children and strengthening families across the region.