Concert in the Park moves indoors, to the home of Dan and Juliann Clemente, minutes away from the Park. 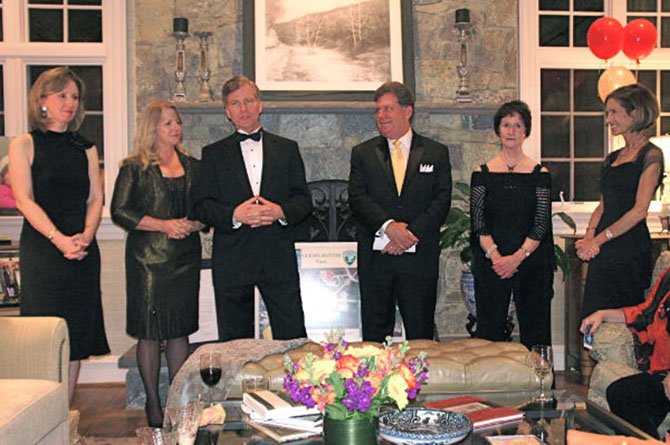 On Saturday, April 21, the Friends of Clemyjontri Park Foundation in McLean held their second annual Concert in the Park – sort of. The theme of this year’s black-tie fundraising event was "Under the Big Top" and was scheduled to take place under the park’s newly installed 900 sq. ft. canopy, built to provide shade and available for rental for special occasions. The Fairfax Symphony Orchestra was prepared to play an appropriate selection of circus-worthy selections under the baton of FSO Music Director, Christopher Zimmerman.

The event had been re-scheduled from last September, due to inclement weather. Sadly, the weather once more refused to cooperate: Instead of gathering under the Big Top, the 100 guests, including Virginia Governor Robert McDonnell and First Lady Maureen, huddled under umbrellas as they entered the new venue – the home of Dan and Juliann Clemente, just minutes away from the Park.

Julie Clemente is the founder and president of the Friends of Clemyjontri Park, and along with her husband and numerous family members, has been instrumental in seeing the park come to life from the drawing board and the dreams of Adele Lebowitz, the widow of Mortimer Lebowitz who founded Morton’s Department Stores in Washington, D.C. in 1933 and ran them for more than 60 years. In 2000, Adele Lebowitz donated the family’s 18.5 acre McLean property to the Fairfax County Park Authority (FCPA). The name, Clemyjontri, was derived from Lebowitz’s four children: Carolyn, Emily, John, and Petrina.

"She had just a few conditions to go with her very generous donation," said Clemente. "The park had to be built within five years. It had to have a carousel, and that carousel and all the playground’s equipment had to be accessible to all, regardless of mobility. And that is how and why Dan and I got involved." Clemente explained how they were contacted by the FCPA in the fourth year following the bequest. "Building and maintaining an all-accessible playground costs a lot more than a regular play park," she said. "I guess they figured with 9 kids, we would be unfair users of the facility," she laughed, "so we got the call, we founded the 501(c) (3) Friends, and the money was raised. Now there is this wonderful park, the first in the Commonwealth, and one of just a handful anywhere, where everyone can play and enjoy themselves.

AN ADDED BENEFIT to the park not thought of when it was created is how it is now being used by military personnel injured in combat. Clemente and Heather Cox, Executive Vice President with sponsor Capitol One Bank, both spoke about the rising use of the park by this constituency. "What a way to give back to our community," Cox said. "It is so heartwarming to see our service personnel who have already sacrificed so much, really able to play with their children, not just watch from the sidelines, " added Clemente.

The Foundation continues to raise funds to add additional equipment like the wheelchair-accessible Liberty Swing installed last year and to maintain the park’s facilities. "All the money raised goes directly to the park. No salaries and overhead," added Clemente.

The distinguished supporters who enjoyed the delights provided by Susan George Catering and the strains of the Fairfax Symphony Quartet, included Kevin Fay, Dranesville District Representative on the Fairfax County Park Authority Board, and the evening’s Master of Ceremonies. Fay introduced Gov. and Mrs. McDonnell, Sharon Bulova, Chairman of the Fairfax County Board of Supervisors, delegate Barbara Comstock, the Clementes and other honored attendees. "Although everyone here is a distinguished guest," noted Mr. Fay, "none of the this is possible without each and everyone of you."

Governor also addressed the gathering. "Next time Virginia has a drought, I am calling you Julie," he joked with Mrs. Clemente. Governor McDonnell then thanked all the contributing sponsors and guests for their continuing efforts and support and care for the residents of Fairfax County, and in fact, for all Virginians.

TO LEARN MORE about Clemyjontri Park, or to become a Friend of this foundation, check out their website at www. Friendsofclemy.com.