'God of Carnage' at Signature Theatre 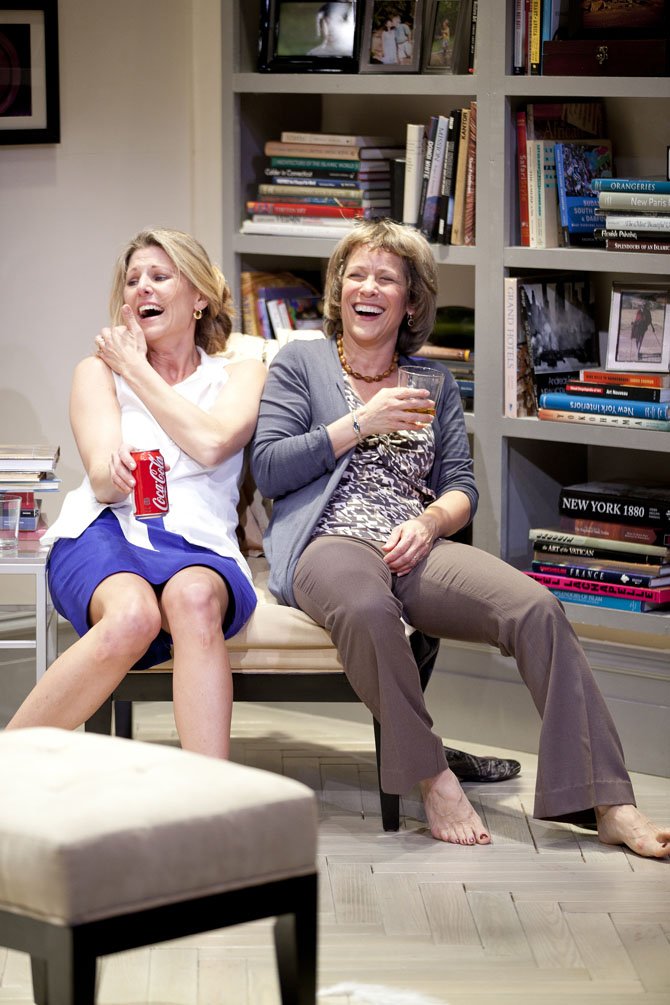 Vanessa Lock (left, as Annette) and Naomi Jacobson (as Veronica) share a laugh and a drink in the Washington premiere of "God of Carnage". Playing at Virginia’s Signature Theatre through June 24.

It begins innocently enough: Two New York couples oozing affected politeness meet to discuss a playground scuffle between their sons. Painstakingly attentive to social niceties, they hope to talk things over in a calm, mature and rational way.

It doesn't take long for the couples to drop the charade and trade their parsed euphemisms for boxing gloves in the Signature Theatre production of the Tony Award-winning “God of Carnage.”

Written by French playwright Yasmina Reza and translated by Christopher Hampton, the Signature production stars Vanessa Lock and Paul Morella as Annette and Alan Raleigh, the parents of the offending youth, and Naomi Jacobson and Andy Brownstein as Veronica and Michael Novak, the parents of the victim.

Over espresso and calfouti, polite chit chat is quickly abandoned as Veronica persists in pressuring Annette and Alan to accept responsibility for their son's behavior. Having none of it, small irritations between the couples give way to more direct confrontation as the social pressure-cooker begins to boil over.

Together with Brownstein, Lock and Morella, the actors play off one another with the expertise and timing of a finely tuned quartet as director Joe Calarco orchestrates their performances like a maestro.

Morella nails the smug smoothness of Alan, the cocksure lawyer who is more concerned about his cell phone conversations than the task at hand, with Lock as his increasingly ill and eruptive wife Annette.

As Michael, Brownstein is the boorish counterpoint to Jacobson's rapidly unraveling Veronica. The hostility and humiliation hurled between the couples is the stuff of hilarity as rum is consumed and allegiances shift with blazing speed.

James Kronzer's well-designed set provides a sophisticated playroom for the physical action that eventually replaces the verbal volleys in this one act, 90-minute play where two wealthy and self-righteous couples take no prisoners. Add in some good rum and Cuban cigars and you get an evening that is anything but boring.

“God of Carnage” is playing now through June 24 at Signature Theatre, 4200 Campbell Ave., Arlington. For tickets or more information, call 703-820-9771 or visit www.signature-theatre.org.