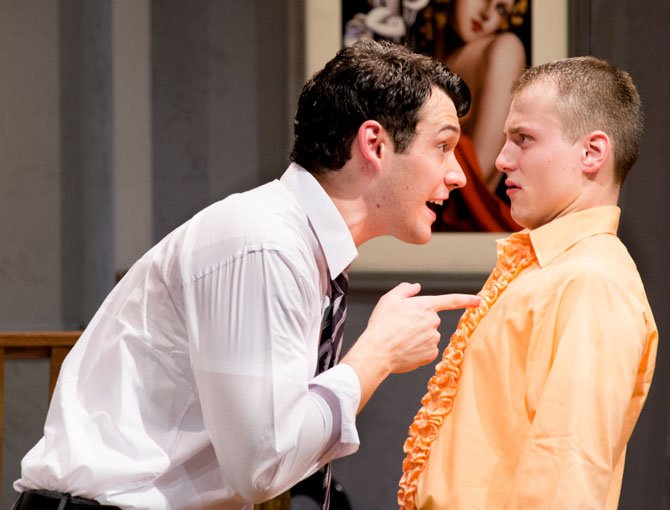 The Baker Brothers: Elliott Kashner as Alan and Alex Alferov as Buddy in “Come Blow Your Horn,” now playing through Oct. 12 at The American Century Theater. Photograph by Johannes Markus

‘Come Blow Your Horn’ at the American Century Theater

Arlington — It’s been more than half a century since Neil Simon’s “Come Blow Your Horn” made its Broadway debut, launching one of the most successful playwriting careers in the history of the American stage. Filled with what would become Simon’s trademark wisecracking repartee, the autobiographical portrait of a young man leaving home to experience the swinging single lifestyle of the ’60s is performed to perfection by The American Century Theater at Gunston Arts Center Theatre Two in Arlington.

Directed by Rip Claassen, “Come Blow Your Horn” tells the story of Buddy, a 21-year-old virgin who decides to leave his parents’ home to live in New York City with his metropolitan man-about-town brother Alan. Complications and hilarity ensue as the brothers battle each other, their parents and the women who keep coming in and out of their lives.

Elliot Kashner is impressive in the central role of Alan. His savoir faire oozes off the stage as he brings an exasperated charm to the Manhattan playboy who is cruising through life with no worries, no commitments and no depth.

Fresh-faced Alex Alferov brings a wide-eyed innocence to the role of younger brother Buddy, who arrives suitcase in hand at Alan’s bachelor pad in hopes of experiencing a more hedonistic lifestyle.

Kashner and Alferov are joined on stage by TACT veteran Mick Tinder as Mr. Baker, Allison Turkel as Mrs. Baker, Lizzie Albert as wanna-be starlet Peggy and Heather Benjamin as Connie, the woman Alan is in danger of losing. Together they form a formidable cast that handles Simon’s intricately synchronized script with comedic precision.

In a classic scene, Turkel nearly steals the first act as the boy’s perpetually agitated mother, teetering on the edge of hysteria over a succession of bewildering phone messages and a missing pencil.

Theater veteran Tinder is the demanding, morosely funny Mr. Baker, Turkel’s partner in parenting. Tinder lifts every scene he's in as Simon's deftly written barbs fly from his mouth and keep the audience in stitches.

A 1995 Kennedy Center Honoree and recipient of the Mark Twain Prize, Simon penned the Academy Award-winning “The Goodbye Girl,” and took home Tony Awards for “The Odd Couple,” “Biloxi Blues,” and the Pulitzer Prize-winning “Lost in Yonkers.” Under Klaassen’s masterful eye, The American Century Theatre production of “Come Blow Your Horn” brilliantly brings Simon’s comic genius to a new generation of theater audiences in a night of hilarity that should not be missed.

“Neil Simon has been a major cultural force, but more importantly, his plays are still as funny as ever,” said TACT Artistic Director Jack Marshall. “American theater and the culture owe a big debt to Neil Simon, for nobody has given us more laughs than he.”