Cemetery would get land to expand; county would get site for heritage center. 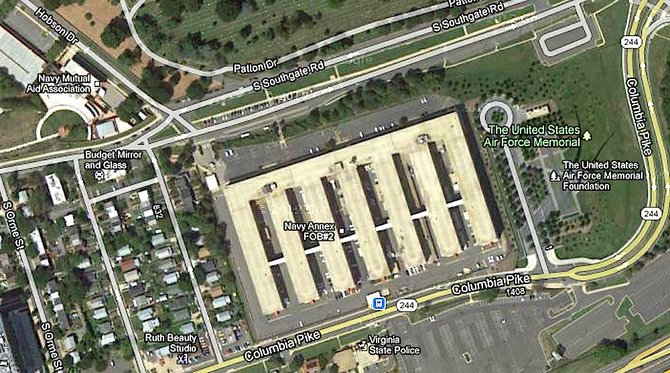 The cemetery wants land the county owns on Southgate Road, while the county is trying to get land that's currently part of the Navy Annex. At issue is whether or not the federal government will contribute to straightening Columbia Pike.

The ghosts of the Civil War are still haunting Arlington National Cemetery, where county government officials and the U.S. Army are negotiating a land swap that could save the long-planned Arlington Heritage Center. The center’s future was cast into doubt earlier this year, when the Army backed out of a deal negotiated years ago that gave the cemetery land to expand the cemetery and the county space to create a new heritage center.

Now county leaders and federal officials are trying to cobble together a new deal.

At issue is a stretch of land in one of the most historic parts of Arlington — an area west of the Pentagon and south of the cemetery. Army officials backed out of the non-binding contract because they were concerned that the existing swap did not maximize the acreage of land they could get to expand the cemetery. The new land swap under negotiation now will give the cemetery more land on the outskirts of the existing cemetery so it can increase the number of graves by four acres, pushing the land given to the county south of Columbia Pike.

“If the two sides can reach an agreement that I feel meets the needs of the community and the cemetery, I’ll insert language in the Defense bill authorizing its enactment,” said U.S. Rep. Jim Moran (D-8) in a written response to questions. “Otherwise, no deal will move forward.”

THE BIGGEST OUTSTANDING issue is whether or not the federal government would contribute to the redevelopment of Columbia Pike. Meanwhile, the Army is hoping to pick up an extra four acres of space for burial. And the county is hoping to land a spot for the long-awaited heritage center. Stakeholders are apparently awaiting the results of a survey that would detail which acres could be swapped, although it’s unclear when the survey would be completed or where the money would come from to complete the survey.

“It’s not like the Army walked away from the deal,” said Ali Ganjian, president of the Arlington Historical Society. “It’s more like all the parties have had a change of interest.”

For Army leaders the goal is to increase the amount of land it can use for burials by expanding into land the county currently maintains for Southgate Road. For Arlington officials, the goal is to straighten Columbia Pike. To facilitate that swap, county officials will need to conduct a survey to determine how much land to swap — a deal that includes local, state and federal land. After the survey is conducted, county leaders would need to cut a deal with the Army then get congressional approval. Depending on how the deal is negotiated, the Virginia Department of Transportation might need an “interchange justification report.”

“There’s not a disinterest to do the land swap,” said Ganjian. “All parties are still interested. It’s just that the land that would be given to the county is what’s in question.”

THE STORY OF THE Arlington Heritage Center dates back to the 1860s, when the federal government seized the plantation estate of Confederate Gen. Robert E. Lee. Within six hours after Virginia announced secession, the Union invaded and began a long occupation of Alexandria and Arlington. Former slaves steamed into the Washington area from throughout the south, newly emancipated by war and in need of housing. So the government established a Freedman’s Village at the Arlington plantation — a settlement that included about 100 homes, a school and a church.

“This was not the 40 acres and a mule everyone thought they were going to get,” said Michael Leventhal, historic preservation coordinator for Arlington County. “It was there to teach freed blacks a trade, give them some land around it so they could garden and be self sustaining, and it was to be for a temporary time.”

The Arlington freedman’s village was one of several established throughout the Washington area. Others were on Roosevelt Island and south of Old Town. Many of the people from Arlington’s freeman’s village ended up staying in the area, establishing African-American communities in Nauck, Green Valley, Hall’s Hill, Penrose and Queen City. By the 1890s, the federal government was no longer willing to be a landlord for the village.