Trapped in a downward spiral of homelessness beginning in the summer of 2009, Marvin and Debra Britt, both 52, endured.

“That’s when the economy got hard. We lost our jobs,” said Marvin Britt, who was working building homes at Fort Belvoir while Debra had a job doing inserts for a newspaper.

Unable to keep up with their rent, they lost their place and resorted to “sleepin’ on the sidewalks, sleepin’ on the streets, sleepin’ at the bus stop. We slept everywhere you wanna sleep at except in the woods. Most likely we stay at where people can see us.”

When Marvin Britt could make money at odd jobs like painting, landscaping and cutting grass, they’d bed down to recuperate at a cheap motel.

“I was workin’ little odds and ends jobs, workin’ tryin’ to keep a roof over my wife’s head. We might stay two nights out of the week stayin’ at the bus stop, then save the money up and we might go into the motel, then take a shower and the next day we back out at the bus stop. Really I didn’t have no steady job. But I try to provide for my wife.”

For Marvin Britt, the experience was “frightening and scary. I think I was more scared than my wife was. I think my wife was more braver than I was.”

An anonymous good Samaritan attempted to make a lasting difference. “He just saw us with our bags out there. He came up and I said we was homeless and he gave me and my wife $180, bought us dinner at Applebee’s and gave us a room over there. Alexandria Motel. Just a stranger. Some good things came out of it.”

“One night we was on our way, we had about 80 bucks on us. It’s either go ahead and pay the 65 for the motel and leave 15 in our pocket to eat food. Then all of a sudden this white van came up.”

Inside were two volunteers, apparently with the Loaves and Fishes food ministry formed by a loose confederation of churches in the Franconia area. They distribute food to the homeless on Fridays.

“He opened the back of the truck and gave us food. He said there’s a place called Rising Hope. He say come on up here and you stay warm, and we caught a bus up here,” said Marvin Britt

They arrived at Rising Hope Mission, a United Methodist church located on Russell Road just off Route 1. Its ministry is serving the homeless and needy of the Route 1 corridor. From December through March volunteers mostly from area churches staff the Ventures in Community Hypothermia Outreach Program there, providing a hot dinner, breakfast, and a warm, safe place to sleep in sleeping bags on mats in rows on the floor.

“That’s the first day I met Miss Sherry. She been like a momma to me,” said Marvin Britt. Sherry Edelkamp is a New Hope Housing staffer who manages VIC-HOP. She urged them to go to the Eleanor Kennedy Shelter located farther down Route 1, also operated by the nonprofit New Hope Housing. But Marvin Britt had an independent streak and it would be two years before they went.

Finally they arrived at Kennedy Shelter; New Hope Housing staffers helped them get their lives back on track. Debra Britt’s teeth were bad, which made it hard to smile when she sought jobs. “New Hope Housing came through faithfully,” said Marvin Britt. Providing dentures for her, they also helped her get glasses. She’s now working in home care.

Over the summer, while they continued staying at Kennedy Shelter, Marvin Britt was working for a roofing company, rising at midnight to go to work with the crew at night to avoid the heat. “I’m on leave now. No work, no work.” 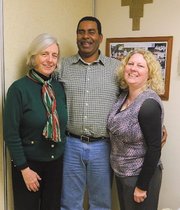 Marvin Britt beams when he expresses his gratitude for New Hope Housing staffers, including Pamela Michell, executive director, and Sherry Edelkamp. Not pictured, his wife Debra was working.

Life at the shelter wasn’t easy. Unlike Alexandria Community Shelter, also run by New Hope Housing, there are no private rooms for families. With 38 men in a dormitory room, Marvin Britt said the snoring was a racket and interaction could be a problem.

But Marvin and Debra Britt ate regularly at Kennedy Shelter and got training in life skills taking three classes: Out of Poverty, Ready to Rent, and Finance and Budgeting. Then, with Debra Britt working steady and her credit improving, staffers helped them apply for Section 8 Housing set aside for the homeless. Staffer Luke Taylor helped them locate and negotiate for a place.

Marvin Britt said they want to contribute to New Hope Housing when they’re able. “It’s a blessing what this organization did for me and my wife. It’s a blessing. I thank Miss Pamela and Miss Michele and Miss Tonya ... and Miss Milly, I’d like to thank her too.”

Their ordeal at end, Marvin Britt looked back: “We been out here almost three and a half years, and I mean it been hard. We finally gettin’ somewhere.”

Need help? Or want to volunteer? Contact Sherry Edelkamp at vichop2010@yahoo.com or call 703-799-2293 and press O. "We've still got open nights so it would be great if we got volunteers," said Edelkamp.