'The World Is Our Market'
Votes

'The World Is Our Market'

Palmieri to chair Chamber of Commerce

When Andrew Palmieri first moved to Alexandria in 1985, he and two roommates struggled each month to pay the rent on their West End apartment.

"We were barely making ends meet," said Palmieri as he reflected back on his early years in the city. "I was in my second year of law school and since that time, I've lived in pretty much every part of Alexandria."

No longer a struggling law student, the noted partner with Saul Ewing LLP is consistently listed as one of the top lawyers in the region and was named among the 2011 International Who's Who of Real Estate Lawyers. On Feb 11, he will add the title of Chairman of the Board of the Alexandria Chamber of Commerce to his resume.

"I'm very excited about my new role," said Palmieri, who previously served as the chair of the Chamber's government relations committee. "My goal is to continue to grow the Chamber as an advocacy force in the city and the region."

"I'd like to see the Chamber grow through a combination of membership numbers as well as demographics," Palmieri said. "The world is our market here. The world does business here and while the small businesses are the backbone of our economy, it's the larger businesses that can support us economically so that we have the resources to help the small brick and mortar shops."

"My goal is to continue to grow the Chamber as an advocacy force in the city and the region."

Palmieri takes over at a time of transition for the Chamber. Former CEO Tina Leone resigned in December after two years in that position and a search has been underway for her replacement.

"We're very close to making a decision," Palmieri said. "We hope to have an announcement prior to or in conjunction with the Gala but aren't going to sacrifice the quality of our search to meet a deadline. This was a nationwide search and we had more than 90 applicants."

Palmieri will take the reins of the Chamber from "Mango" Mike Anderson at the traditional Chairman's Gala Feb. 11 at the Westin Hotel.

"This year it will be the 'Giving Back' Gala," Palmieri said. "I wanted to do something that would highlight the great work of the charitable organizations in the community and show that the Chamber supports those organizations."

Five local nonprofits were selected by the Chamber board as beneficiaries of an online voting campaign: The Animal Welfare League of Alexandria, Carpenter's Shelter, the Campagna Center, Rebuilding Together Alexandria and the United Way.

Online ballot for the Chamber of Commerce Giving Back Gala. Individuals do not need to be a member of the Chamber or attend the Gala to vote for their favorite charity. Vote at www.alexchamber.com.

"It was important to Andrew that the Chamber send the right tone to the community," said Gala chair Adron Krekeler. "He wanted the focus of the Gala to be about giving back rather than on his taking over the leadership."

One message Palmieri wants to be clear on is politics.

"We are definitely a non-partisan organization," Palmieri said. "We don't get involved in politics, we get involved in issues and sometimes those issues, like the waterfront, are hard decisions to make."

As he settles into his leadership role, Palmieri is looking forward to the year ahead.

"We're going to have a great year," Palmieri said. "My biggest goal is to have the Chamber be an even better organization when [John] Renner takes over from me this time next year." 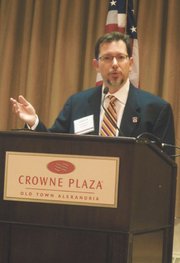 Andrew Palmieri, speaking at the ABC's of Business event Jan. 26, will take over as Chairman of the Board of the Chamber of Commerce at the Chairman's Gala Feb. 11 at the Westin Hotel.