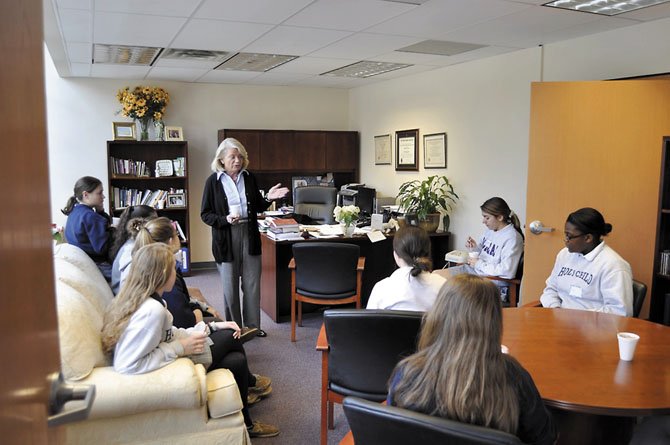 If you had the opportunity to design a new urban plan for Potomac Village, what would you change?

Twelve junior and senior students from the Connelly School of the Holy Child were given this challenge Tuesday morning, Jan. 24, during a surprise “mini-mester” day. After an explanation of what city planning is all about by teacher Cindy Kahan, the girls were assigned to “dream big with no constraints.” They envisioned creative ways to improve the River and Falls crossroads area — and to make Potomac a better place to live, work and play.

The “mini-mester” day was a new concept at Holy Child. Upon arrival at school last week, upper-level students were surprised that classes were cancelled. In their place were “mini-mester” courses on topics designed to spark interest or fulfill passions. Teachers had been given the opportunity to plan and teach their dream courses, resulting in workshops that mixed the arts and science, hobbies and travel, mythology and modern life.

According to Kathy Ely, director of communications, “A stroll around the halls on this special day provided amazing moments: Jane Austen fans living the life of the Bennetts, from high tea to whist and formal dancing; art history coming to life as fans and haters debated whether modern art sculptures or Dali’s psychedelic paintings are, in fact, good art; 16-year-olds still negotiating allowances while getting their heads around stock exchanges and compound interest — and girls getting to know themselves by delving into personality trait testing. There was Paris, the night sky, “storm stories” and even knitting.”

Students were surprised but positive about the classes and opportunities. One student who opted to learn “Foundational Theology” said, “I liked that the class was free response, not as structured as regular classes.” One junior loved the Jane Austen “tea party” and “An Introduction to Your Personality.” The young women who chose the “Designing Better Communities” challenge were first briefed on the concepts of smart growth and environmentally friendly urbanization by Kahan who earned her master’s degree in urban planning. They were told to list the strengths, weaknesses and problems in the Village. The students were particularly concerned about the traffic and lack of pedestrian and/or bicycle trails.

They developed the idea of a central plaza in the middle of the River/Falls Road intersection with the traffic diverted around the plaza by round-abouts. They added walking and bicycle paths around the perimeter. The student planners envisioned all kinds of activities in the village plaza, including a farmer’s market, play-ground, outdoor concerts and gatherings for the community. They also felt the Village needs higher density housing to accommodate lower incomes, seniors who wish to downsize yet remain in the community and the younger first-time buyer. They also planned more outdoor cafes and a variety of boutiques — and they were unanimous that Starbucks must remain.

The young women also discussed the historical perspective of Potomac. They felt the home at the corner of River and Falls which currently houses W & A.N. Miller Real Estate could be turned into a Potomac historical museum. Other historical homes and places in Potomac could be identified and highlighted in the museum. Other plans included closing the plaza area on weekends and diverting traffic outside the crossroads area. Several of the girls told Kahan that, after the seminar, they viewed their environment differently — that they now realize that urban change can take place through community channels.

Next year, Holy Child plans to expand their “mini-mester” concept by offering week-long or even multi-week courses during the semester break.