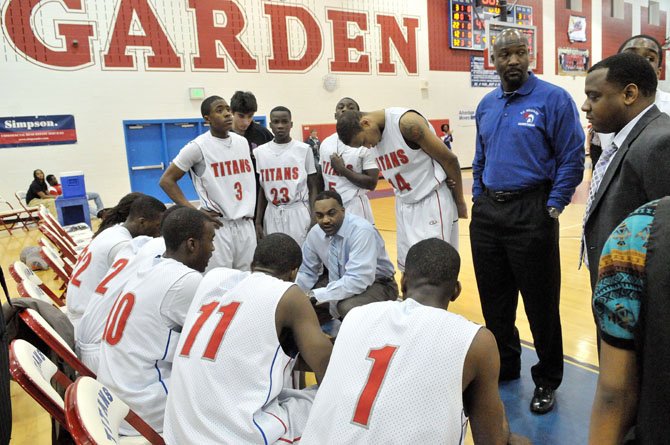 T.C. Williams boys’ basketball coach Julian King talks to the Titans during a game against Lake Braddock on Feb. 7 at The Garden. Photo by Louise Krafft.

Alexandria — The T.C. Williams boys’ basketball team held a slim lead against Lake Braddock early in the fourth quarter when forward T.J. Huggins got the ball in front of the Titans’ bench.

The senior had an opportunity to shoot a 3-pointer or attack the basket. Instead he hesitated, and then fired up an airball. Head coach Julian King wasn’t pleased with the decision making of one of his best players, and he let Huggins know it. 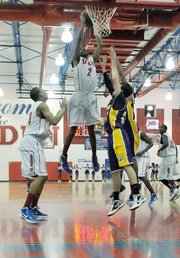 T.C. Williams senior T.J. Huggins scored 28 points on senior night during a 65-54 victory against Lake Braddock on Feb. 7 at The Garden.

"With him being a senior, him being a two-year starter for us and being probably our best player, there should be no hesitation," King said. "It’s either a shot or a drive to the basket."

Shortly after their conversation, Huggins knocked down a 3-pointer from the left corner — the scene of his previous mishap. Later, with a chance to bury the Bruins, Huggins made six straight free-throw attempts in the final 25 seconds to lift the Titans to a 65-54 victory on Feb. 7 during senior night at The Garden.

Huggins finished with 28 points and 10 rebounds during the final regular season home game of his career, helping TC improve to 12-9, including 8-5 in the Patriot District. With the district tournament beginning Feb. 14, King said the Titans have the talent to compete in the postseason — Landon Moss scored 15 points against Lake Braddock and Jordan Byrd added 13 — but the team has to cut out mental lapses.

Huggins quickly made up for his hesitation gaffe against the Bruins. How will the Titans respond in the postseason?

"We have the talent, I think we have the right pieces, it’s just a matter of us putting it together for 32 minutes," King said. "We either have a slow start or we have a fast start and we taper off toward the middle or toward the end."

A 12-9 record is considered a down year for a program that has won four of the last five Northern Region championships. With only a Feb. 10 contest at Annandale remaining in the regular season, the Titans could finish in a tie for second in the district standings or as low as tied for fourth depending on how things play out amongst South County (9-4), Lake Braddock (8-5) and West Potomac (8-5). Woodson (12-1) has secured the district’s top seed.

"We have the talent, I think we have the right pieces, it’s just a matter of us putting it together for 32 minutes. We either have a slow start or we have a fast start and we taper off toward the middle or toward the end."

"For other people, they don’t fear us," King said. "They don’t fear us at all. Their thing is hang tough with us and hopefully [we’ll] fold mentally toward the end. As far as us going in, it should put a chip on our shoulders because we haven’t gone into the playoffs with this many losses before."

Huggins said the Titans are no longer a focal point of opposing teams.

"It feels like the target isn’t on our backs anymore," he said. "It’s been on our backs for the past few years. Now we can just go out and play. I won’t say there’s less pressure. We still won the district last year so we still want to repeat, but we’re not No. 1."

Seniors Byrd, point guard Daquan Kerman and post Damoni Moore also played in their final regular season home game at The Garden. King said he relies on Kerman for leadership and would like the other seniors to be more vocal toward younger players.

"Daquan Kerman has been with me four years," King said. "He’s a three-year starter. He’s been through the ups and downs during the past few yeas. He means so much to us not only because he handles the ball for us 90 percent of the time, but just because he’s been there, he’s experienced it. There’s nothing he hasn’t seen. I’m expecting that experience to filter through him and throughout the rest of the team."