And the Greatest of These Is Love
Votes

And the Greatest of These Is Love

Celebrating a marriage in the face of Alzheimer's disease 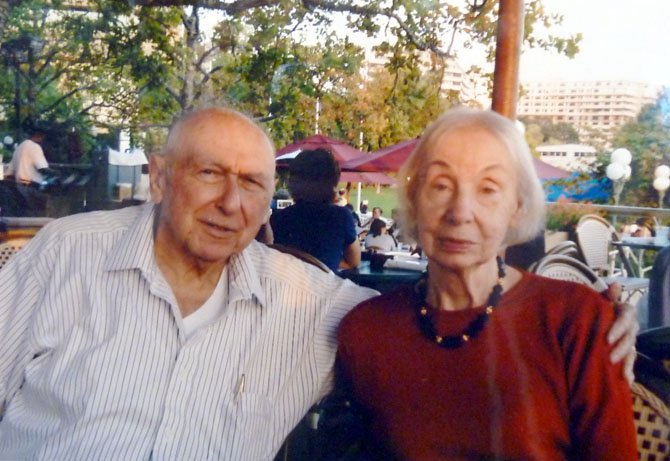 The phone conversation was not going well. It was 1956 and Abe Ashcanase was being questioned by a new personnel relations employee regarding a colleague at his post in Bangkok. A World War II veteran and seasoned Foreign Service Officer, Ashcanase didn't appreciate the tone Betty Roth was using with him and they both ended the frustrating call with relief.

"She slammed the phone down and I thought that was the end of it," said Ashcanase as he recalled his first encounter with Roth. "Imagine both of our surprise when a few months later she walked into my office as the newest member of my temporary support staff."

Roth and Ashcanase are in the twilight of their years now — Abe is 93 and Betty 86 — and on Feb. 27 will celebrate their 55th wedding anniversary.

"To make it 55 years is just a matter of endurance and a sense of humor," Ashcanase said with a smile. "To get along in marriage you need to duck appropriately and keep your mouth shut."

Retired from the State Department since 1974, Ashcanase's career took the couple around the world before they settled in Alexandria, where Betty happily became involved in the community.

Abe Ashcanase looks through his wedding album as his 55th wedding anniversary approaches.

"I guess people just forget," Ashcanase said with a trace of sadness in his voice. "Betty had so many friends but now no one calls to ask how she is doing or if she is even dead or alive."

Betty was diagnosed with Alzheimer's disease nearly 10 years ago. Until she suffered a stroke last November, Ashcanase cared for her at their West End home before moving her to Goodwin House, where he spends his days by her side.

"People said I should have put her in an institution years ago," Ashcanase said. "But I have a responsibility to take care of my lady. It's not about convenience. It's just the right thing to do."

Betty is one of 5.4 million Americans living with Alzheimer's disease. It is the sixth-leading cause of death in the country and the only cause of death among the top 10 in the United States that cannot be prevented, cured or even slowed. 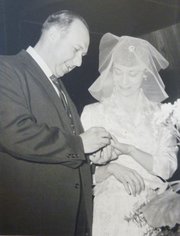 Abe and Betty Ashcanase were married Feb. 27, 1957, at the Chosun Hotel in Seoul.

"Yes, there have been difficulties but you need to take the cards the way they are dealt and take it seriously," Ashcanase said. "If you take a vow and it has no meaning, then why take it?"

"Would I do it over again? A resounding 'yes.' But it is a long goodbye to the love of my life."

Betty only rarely recognizes her husband these days but that does not deter Ashcanase from spending as much time as he can with his wife at Goodwin House.

"Even though she may not remember that I was her husband, she still appreciates my visits," Ashcanase said. "She has always kept her sense of humor and social graces and thanks me whenever I am there."

Like any Alzheimer's caregiver, Ashcanase has learned from his experience and readily shares his advice with those facing the same situation.

"It's important to remember you are dealing with a human being," said Ashcanase, who was a featured speaker on the topic at the National Press Club last May. "You need to give the person a sense of self-esteem and self-respect. The only quality of life they have is what you are able to provide to them."

Despite the challenges, Ashcanase has no regrets about marrying the feisty young woman who dared challenge him so many years ago.

"Would I do it over again? A resounding 'yes,'" Ashcanase said. "But it is a long goodbye to the love of my life"