Campbell Takes a Look Back
Votes

Campbell Takes a Look Back

Although Mike Campbell will leave Centreville High in July, he’s still delighted to be its principal and is proud of the school’s standing locally and nationwide. 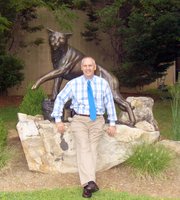 Mike Campbell poses in front of Centreville High with the school mascot.

"In my six years here, we were consistently ranked by Newsweek as in the top 5 percent of schools in the country," he said. "Last year, we were number two in the state of Virginia and, a few years ago, the Virginia Department of Education ranked us one of the top 10 model schools in Virginia."

Campbell has deep roots in this area, having lived in the Centreville community for 25 years. "I’ve lived here longer than anywhere I’ve been in my life," he said. "When we moved to Centreville, there were only two restaurants here — the Pepperoni Stick and Payne’s."

As his sons grew up, he also coached SYA sports teams and made many close friendships and enduring memories. "It’ll be hard to leave my friends here," he said. "I’m going to miss the school, the kids, the neighbors and the community; they’ve all been very supportive. And I can’t say enough about the teachers I’ve worked with at Centreville and Westfield."

Among Campbell’s many achievements at Centreville were beginning the Freshman Academy to mentor new students and the Cats mediation program for students needing extra help. He’s also thrilled that the current Wildcat varsity football team made the state football playoffs, and he was happy to see how the student body and community came together to support its efforts.

"Every graduating class at Centreville has been special," he said. "I knew many of these kids as they grew up in the community and through coaching them. It was great seeing them come into school as freshmen and gather outside my office to see me. They felt a sense of security, and the parents always knew I had their kids’ best interests at heart. I want the best of everything for this school because my own kids went here."

Campbell’s also pleased with the school’s aesthetics and building improvements, including a new gym, as well as its upgraded sports equipment and lights on the baseball field. "Improving its appearance facilitates the teachers’ abilities to teach," he said. "I always looked at my role as a principal as not telling people what to do, but giving them the tools that made it easier for them to do it."

Counting his blessings, he said, "I feel like I’ve been very lucky in my career. My days at Westfield — opening up a new school and working with that community — were very special. But working at Centreville — the same school where my kids were — I wouldn’t have traded that opportunity for anything in the world."

Now, he’s also excited about what the future holds for him in Alabama, but he won’t forget his time here or Centreville High.

"Overall, we’ve been very successful and effective, and I’m really proud of our tremendous faculty and students," said Campbell. "I’m leaving this school with things being very positive and with Centreville being recognized as one of the top schools in the country."

"I appreciate all the help and support I’ve gotten from the community for me, my family and my kids, over the years, both at Westfield and Centreville," he continued. "Centreville High School is not Mike Campbell — it’s the Centreville community. And that’s why, when I’m gone, it’ll still survive."