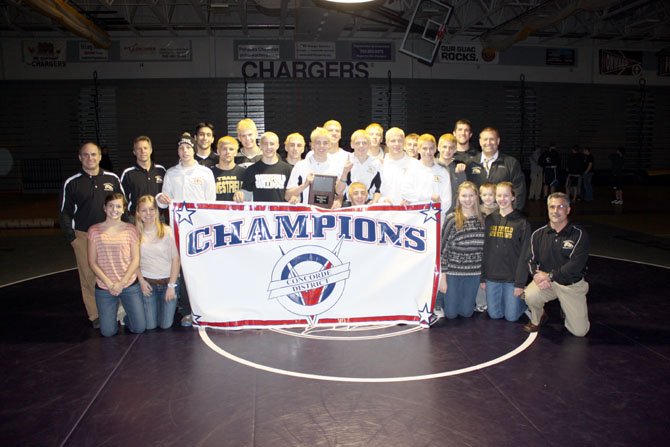 The Northern Region Championships are set to take place this Friday and Saturday (Feb. 10-11) at Hayfield High School in Alexandria.

“We wrestled really, really well,” said Westfield head coach Chuck Hoskins, of his squad’s showing at districts. “I was very pleased with how we executed and got after it.”

Westfield had two other wrestlers make it to championship matches – Stephen Aiello (145), who lost to Robinson’s Brooks Martino, 9-0, in the finals match; and Ben Cameron (132), who fell to Chantilly’s Walter Carlson, 6-2, in the title match.

The top four finishers at each weight class earned an automatic seeding for regionals.

FOURTH PLACE CENTREVILLE had one first place champion in Ryan Sepulveda (170), who won his championship match over Robinson’s Cole DePasquale, 3-0.

CHANTILLY HIGH, fifth in the team standings, had one champion and seven top four place finishers. Walter Carlson was the Chargers’ champion, winning the 132 division with his 6-2 finals win over Ben Cameron of Westfield.