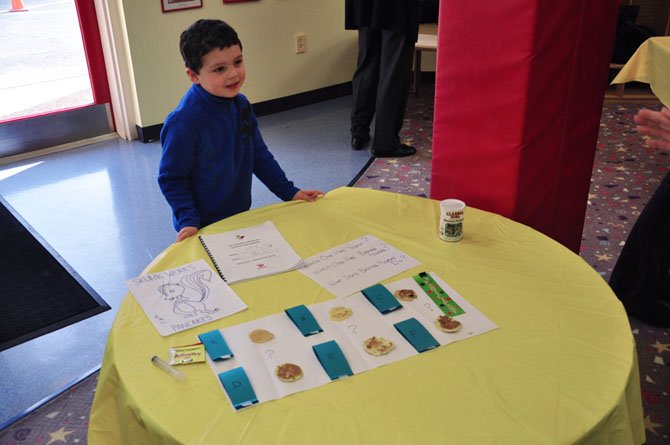 Cameron Cambetta presents his science fair project, pancakes made with and without a variety key ingredients at the Village Green Day School Friday, Feb. 10. Photo by Alex McVeigh.

"We wanted the students to turn their kitchen into a science lab," said Paula Shapiro, the school’s director of curriculum. "They took something like a family recipe, or something they wanted to make, and experimented by omitting, adding or changing something and documented the results."

Whether it was brownies without eggs, pancakes without flour or a vanilla cake with vinegar, the students kept track of every step with video and photographs. Many even brought in their handiwork. 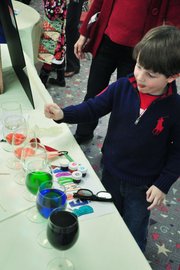 Kais Saleh presented his Supersonic Skylander Spaghetti and Meatballs, which were the result of excessive experimentation.

"I tried leaving out the egg, but the meatballs collapsed, and if I left out the cheese they didn’t taste as good," he said. "And I couldn’t leave out the meat, because then they wouldn’t be meatballs."

Saleh presented his perfected meatballs, along with sauce and pasta, to parents and visitors to the fair.

Owen Sherrill was more comfortable with addition than subtraction.

"I melted Swedish Fish and mixed them into Rice Krispie Treats," said Sherrill, who named his creation "Rice Fishpie Treats." "Swedish Fish is a candy I like, but they were a little hard to spread after I melted them, they just turned into big globs."

Brownies were Will Costello’s experimental material. He made one pan without flour, one without eggs and one that he cooked for half the recommended time.

"The ones without the flour turned out the best," he said. "We cooked it in a cheesecake pan, and my dad looked it up on the internet and said it would work well."

As parents toured the various exhibits, several of them were brave enough to try the experiments, but almost every student was more than willing to try anything put in front of them.

"Anything we can do to get students involved in science, to get them asking questions and work on finding answers, we’ll do," Shapiro said. "We’re trying to get them into that way of thinking as early as possible."