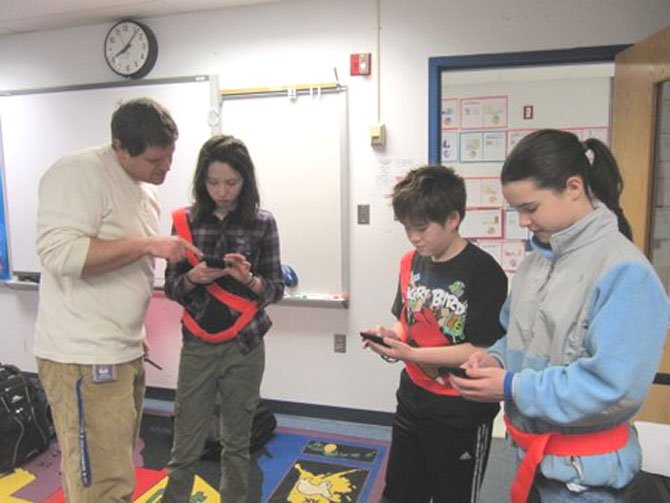 Churchill Road Patrol Captains Jackie Prestoy, Jack Dunne, and Elizabeth Hoeymans, confer with their sponsor, Jordan Craig-Kuhn, as to whether the Patrols assigned to the busses, cafeteria and other locations are in their proper locations. Photo by Kim Moran

After Valentine’s Day, Churchill Road School Safety Patrols began using the latest generation iPod Touches to keep track of student Patrol assignments. The Patrol Captains use these devices daily, both before and after school, to interact with a Google Form for attendance purposes. The data collected from these devices automatically updates a spreadsheet which tracks whether students are following proper protocol by showing up to duty on time, wearing their Patrol belts on duty and diligently performing the duties they are assigned at their post. For meeting each of these criteria, students are awarded one "point" per shift for each of these items. Jordan Craig-Kuhn, Patrol Sponsor, said, "This data, which was being collected via paper and pencil before this week, is invaluable for team tracking, deciding upon Patrols of the month and deciding upon student placement around the school." Craig-Kuhn anticipates that the iPod Touches will be used for student projects and classroom activities in the near future.