Herndon Kicks Off Relay For Life 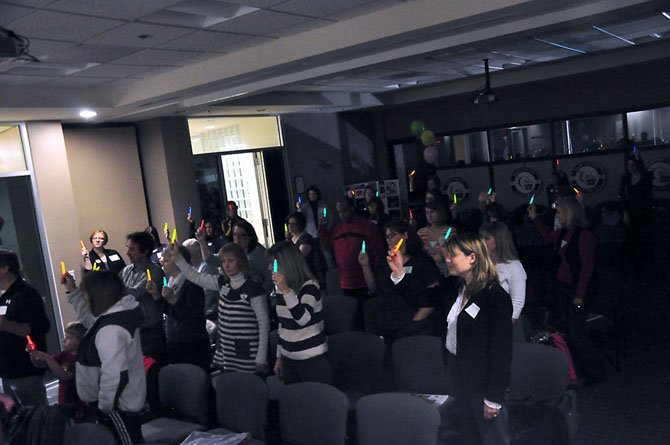 Participants in this year’s Relay for Life in Herndon hold up glow sticks to remember those they have lost to cancer at the event’s kickoff Wednesday, Feb. 15 at the Herndon Police Station. Photo by Alex McVeigh.

Herndon — The Herndon Relay for Life kicked off planning for its ninth year of the event Wednesday, Feb. 15 at the Herndon Police Station. Herndon is one of more than 5,000 communities that hold the annual event, which features an overnight relay event that raises money for the American Cancer Society. 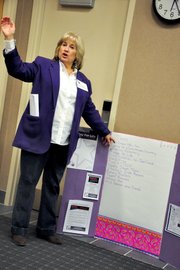 Debby Burt, a committee member for Herndon’s Relay for Life, recognizes teams that have already signed up for the event. This year’s Relay for life will take place Saturday, June 9 at Herndon Middle School.

This year’s Relay for Life will take place Saturday, June 9 at Herndon Middle School, starting at 1 p.m. Herndon has been a successful participant for many years, including being named one of the Top 10 communities nationwide in 2010.

Kristina Baumler, who has served in many capacities for local Relays for Life, called Relay for Life a life-changing event.

"It really helps communities across the globe celebrate, remember and fight back. We involve, we empower, we engage people within the communities," she said. "It’s a fabulous experience to see everybody come together for one night to really make things happen, to educate, to fundraise and really help people understand what it means to fight cancer."

Groups of people can sign up as teams, or individuals can sign up and be placed on teams to participate in the relay. Teams will be hosting fundraisers around the community over the next few months, which will include displaying change jars, holding raffles, corporate dress down days and more.

"We’re challenging each member of each relay team to raise $212 this year," she said. "If everyone in the South Atlantic region, which runs from Georgia to Delaware, does that, we can raise $85 million in this region."

Shari True, a committee member for the Herndon Relay for Life addresses ways teams can raise funds at the Relay for Life kickoff event Wednesday, Feb. 15.

Ashley Mason, who has participated in the Herndon event since its inception, said this year the Relay for Life would be honoring caregivers in addition to the survivors and family and friends who have lost loved ones.

"One thing that many participating survivors have told us is that they would like to see some sort of caregiver recognition to honor those amazing individuals who help the survivors throughout their journey," she said. "Whether it’s a medical professional, a family member, a friend, a co-worker, a neighbor, there are many who play an important role by showing they care during difficult times."

So far, 100 participants from 15 teams have registered for the event. Sheila Grooms, chair for the Herndon Relay for Life, urged all participants to spread the word about their involvement.

"The number one reason people don’t participate is because they aren’t asked," she said.

More information about fundraising events and registering can be found at www.herndonrelay.org.