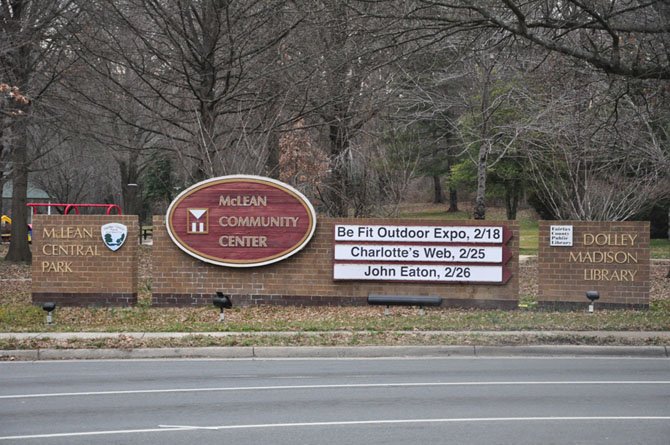 An update for this sign, located at the intersection of Dolley Madison Boulevard and Old Dominion Drive, is currently being discussed by the McLean Community Center Board and the Fairfax County Park Authority. Photo by Alex McVeigh.

McLean — The McLean Community Center has been working on changing and updating the sign at McLean Central Park, at the corner of Dolley Madison Boulevard and Old Dominion Drive for the past few years. But their plan for a new sign, on property owned by the Fairfax County Park Authority, might not be in keeping with the Park Authority's future plans for the park.

THE MCC BOARD of Governors contacted the Park Authority about the possibility of a new sign in December 2010. Due to the old sign crumbling, complaints about its unclear nature and a new MCC logo, the board thought the time was right for a new sign.

The new sign would feature logos of the community center, McLean Central Park and the Dolley Madison Library, and have an updateable LED section that could be used to display current programs.

Kevin Fay, Dranesville representative for the Park Authority, said he has several major concerns about the sign.

"We have taken over three parcels of land in the park, and we're expecting to take over a fourth, and we're going to go through a master planning process," he said. "As we go through the process, the sign could be in a different location."

Fay also said he was concerned about putting an electronic sign in the park.

"We’re not prepared to commit to an electronic sign in the middle of the central view into the park," he said. "I would also like to see a sign that's more balanced between the library, park and community center, not one that gives two-thirds of the space to the community center."

Risa Sanders, MCC board member and chair of the Capital Facilities Committee, said the new sign would reduce the current size of the MCC logo, which is currently in a large oval in the center of the sign.

"Some might argue that this is less intrusive, because the LED portion of our sign is not as high as our current sign inserts," she said. "In terms of public concern, we feel that we have gone to the community, gone to the [Greater McLean] Chamber [of Commerce], gone to these organizations and we're not getting pushback from any of them."

Board Member Craig Richardson said the library was in favor of the new sign.

"We're both located off a side street, that's why this sign is so valuable to begin with," he said. "I think the library is very excited about it, they're one of the primary stakeholders and they're very much in support."

THE BOARDS of the MCC and the Park Authority have agreed to meet within the next few weeks to discuss the sign, and ways they can work together in a more general sense, before the start of the master planning process.

"We recognize that we really share an integrated campus here, and that our primary sign is on Park Authority property, and feel that it is in both of our best interest to be good cohabitants together," Sanders said. "We feel an enormous commitment to the park, and to maintaining the aesthetic of the park, as does the Park Authority, and we take that very seriously."

Park Authority Director John Dargle said he hoped all entities involved could work out a mutual solution to take advantage of the close proximity of the community center, library and park.

"I think we can work collaboratively with the McLean Community Center, along with the library and the park authority to put a theme to this campus, and see how everything can connect," he said.