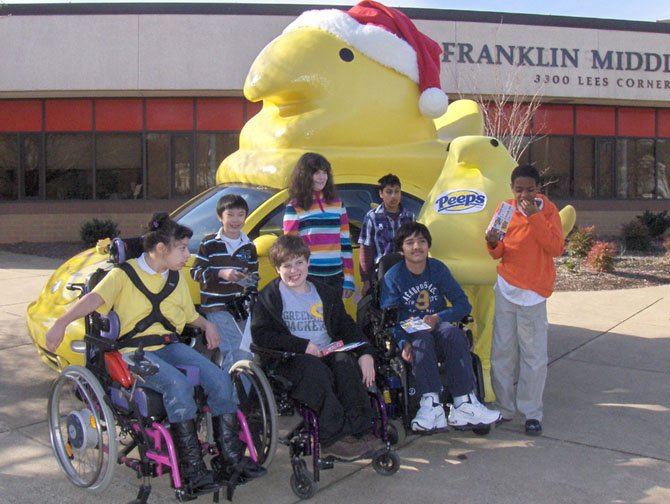 Posing with the Peeps Mobile are students in Franklin’s special-needs program. (Back row, from left) are Alex Nguyen, Lotti Wiltse and Adithya Mathuria, and (front row, from left) are Joeylin Caracoglia, Josh Cibula, Bharat Danturthy and Isaiah Thompson (standing). Photo by Bonnie Hobbs.

Marshmallow Peeps are soft, tasty candies popular during holidays throughout the year. They’re also playing a role in Franklin Middle School’s efforts to encourage positive behavior in its students.

The school developed a year-long, character-education/anti-bullying program based upon Peeps and even received a grant from the candy’s manufacturer, Just Born Inc., to do so.

"Having this program is an innovative way to talk to kids about anti-bullying and positive behavior," said Principal Sharon Eisenberg. "When kids relate to things in a fun way, they react positively to it, so they’ll learn to treat people well." 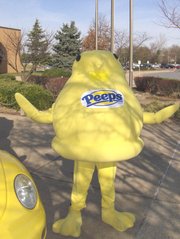 Initially, though, it came about through the efforts of special-education teacher Clara Hauth-Pflugrath and FCPS social worker Devra Gordon.

"Last May, Clara went to National Harbor and came back with a mug with different-colored Peeps on it, saying, ‘Inside, we’re all the same,’" said Gordon. "So when she showed it to me, we both lit up because we knew we wanted to establish a program based on it."

They collaborated with Franklin’s Positive Behavioral Interventions and Supports (PBIS) committee and, in June 2010, applied for Peeps’ nonprofit grant program. As a result, the school was awarded $1,000 to pilot a character-education/anti-bullying program.

"It was a generous amount," said Gordon. "And we’re the only school in the U.S. doing this program with Peeps. All faculty and students signed a Peeps pledge to espouse the qualities we’d expect from people ‘Standing Up for Our Peeps’ in the school community, and in life, to be a good citizen."

Instead of identifying particular bullies, teachers talk about bullying behavior and behavior they don’t want. "Kids can be aggressors or bullies, and that can be fluid," explained Gordon. "We also wanted to empower student and faculty bystanders to know what to do if they see an incident of bullying."

Every month now at Franklin, a different color of Peep is associated with a goal, such as being respectful. "It’s to shift the school culture to emphasize even more caring about each other," said Gordon. "Students will also have an understanding of how to do it."

She said teachers and counselors are giving students the tools to know the difference, for example, between tattling and reporting something. That way, said Gordon, "They’ll understand how to stand up for themselves in appropriate ways, without going for the jugular."

"Middle school is a time when kids want to fit in," she continued. "And if we provide an environment and a culture where we all fit in – even if we have differences – we learn to accept both our differences and similarities," she continued. "We’re a diverse school, and students need to learn to address issues in a positive manner."

So Franklin social worker Toni Tupper, school psychologist Cara Gottheim, the school counselors and the PBIS committee are working together all year to provide character-education and bullying-prevention programs for the students.

HELPING KICK THINGS OFF recently was a visit from the Peeps Mobile – a yellow Volkswagen with a big, yellow Peep on top. Students had their pictures taken with the car and received Peeps candies. The Peeps mascot also came to Franklin to get students excited about the idea, said Gordon, that "They’ve got real ‘peeps’ at this school."

It was a fun activity for them and, quarterly, there’s now an award and party for the school academic team that best exemplifies the Peeps pledge. During the Peeps mobile visit, seventh-grader Andrew Eberly received some Peeps and a coupon for more. "It was cool," he said. "I think the program’s a good idea because bullying is bad. I stopped it when I was in elementary school and stood up for the kid being bullied."

Classmate Kenny Loyola called the event "fun and exciting. I got to meet the Peeps mascot and he flapped his wings." He, too, is glad Franklin has an anti-bullying program "to have peace in the school and so people won’t get into fights."

Seventh-grader Grace Kilner enjoyed getting her picture taken and seeing the Peeps Mobile. She was also happy to get to bring home some Peeps candies for her parents who, she said, "love Peeps." As for the program, she’s pleased her school has it because "I see lot of people get bullied, and it’s mean. I tell them to go away and mind their own business."

Classmate Elizabeth Keene said she’d never seen a car like the Peeps Mobile and she’s pleased about Franklin’s new program. "It’s really important because you see a lot of kids get bullied every day, and you hear about it, too," she said. "Sometimes, it’s just joking around, but it still hurts a kid’s feelings. This will help bullies stop and think about what they’re doing and also think about other kids’ feelings."