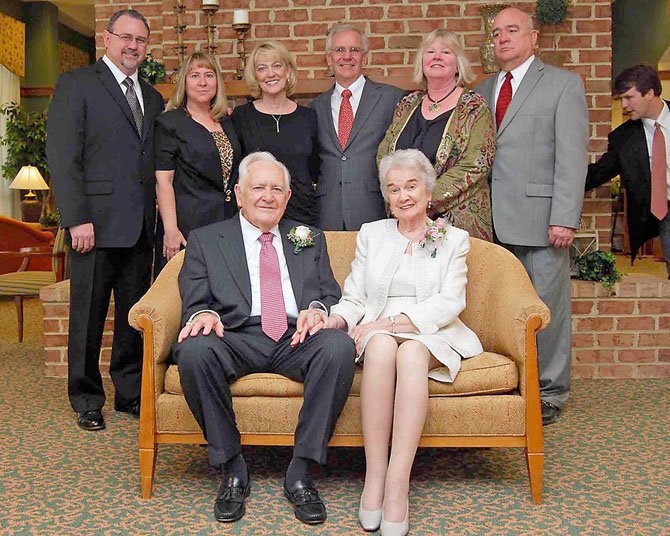 At 89, Ray Wright is as quick with a quip as Jack Benny.

"We had three children before we found out what was causing it."

"She hopes I keep my sense of humor. It’s the only sense I have left."

"My family thinks my first name should be seldom."

"You wouldn’t worry nearly so much what people thought about you if you knew how seldom they do."

"Oh, he makes me mad sometimes, but mostly he makes me laugh," said Betty Wright, a petite woman with a soft Southern accent, who looks decades younger than her 84 years. "That’s one of the things I love about him."

Married on Valentine’s Day in 1947, the Wrights celebrated 65 years of marriage during a family celebration Feb. 18 at Greenspring Retirement Village in Springfield, where they have lived since 1998. "Yes, he’s still my ‘Mr. Right.’ See I can make a joke too," Betty says, playfully punching Ray’s arm on a recent afternoon.

Born in the 1920s, the Wrights grew up in southern Virginia. Ray’s family is from Richmond, where the tobacco industry helped the city recover from the Great Depression, and Richmond attracted businesses relocating from other parts of the country as one of the northernmost cities of the right-to-work states. By the end of World War II in 1945, more than 350,000,000 pounds of war supplies were being shipped through Richmond’s Defense General Supply Center. In 1946, Richmond was the fastest growing industrial center in the United States. 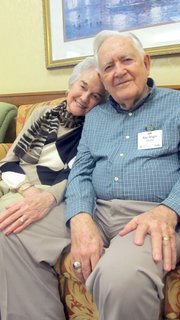 Ray and Betty Wright in their apartment complex in Greenspring Retirement Village. The Wrights, married 65 years, celebrated their Valentine’s Day anniversary with a family party at Greenspring on Feb. 18.

The Wrights came of age during the Great Depression, and evince the qualities and values of what anchorman Tom Brokaw christened "The Greatest Generation." Both are patriotic, exceptionally modest, quietly religious and maintain a strong work ethic. They have faced serious health challenges, but neither dwells on them. Ray, whose voice is hoarse from throat surgery, will only apologize that he can’t speak as fluidly as once did.

"They faced great odds and a late start, but they did not protest. They succeeded on every front. They won the war; they saved the world," wrote Brokaw in his 1998 seminal bestseller. "They came home to joyous and short-lived celebrations and immediately began the task of rebuilding their lives and the world they wanted. They have so many stories to tell, stories that in many cases they have never told before, because in a deep sense they didn't think that what they were doing was that special, because everyone else was doing it too."

Betty grew up on a tobacco farm in Prince Edward County. "I was the middle of five children, and my father farmed tobacco. I can remember before we had electricity. One of my duties was to fill all the lamps," she said.

She was best friends with Ray’s first cousin, and she was a frequent guest at the Wright home in Richmond. "His cousin used to tell me about him all the time. When I first met him, I thought he was so handsome," she said. Betty eventually lived with Ray’s aunt and uncle while she was training to be a nurse with the Cadet Nurse Corps Program, a program instituted by the U.S. Public Health Service to train nurses during World War II, when the demand for nurses increased dramatically, outstripping the supply.

During World War II, Ray served in the South Pacific from 1942 to 1946. "I went to New Guinea at 21 as a platoon commander," Ray said. "I met Betty when she was just finishing up school. I don’t think they would have let me back into the family if I hadn’t married her. They liked her more than me."

Betty said they had been dating for about six months before they got married. Valentine’s Day, she said, was not particularly special to either of them. "We didn’t give the fact that it was Valentine’s Day much thought. We just thought, why wait," she said.

After a ceremony in Richmond, they lived in married student housing on the sprawling campus of Virginia Tech, where Ray had started his degree in 1940. After the war, Ray finished his engineering degree at Virginia Tech.

"We were all supposed to graduate in 1944, but that little disruption known as Pearl Harbor happened, and we didn’t actually graduate until the spring of 1949." Ray showed off his class ring, which is engraved with the Class of ’44. "I guess we wanted to make a point with that ring."

In the Bugle, the Virginia Tech yearbook, students after 1942 were listed either as civilians or cadets. According to the Bugle archives, yearbooks were not published during 1944-1946 because of the limited number of students on campus during those years serving during World War II. Some 7,285 Virginia Tech alumni served in various military branches in World War II; 323 were killed during the war. The school, Betty notes, was dedicated to its motto, Ut Prosim (That I May Serve).

"Those were difficult times for everyone. We didn’t have much, but we did have some of the best years of our married life at Tech," Betty said. "All of the young people had a lot of fun, and we all had a lot in common. We lived in these trailer camps on campus. One was called ‘Pregnancy Heights,’ and another was called ‘Conception Center.’"

AFTER GRADUATION, the couple moved to Alexandria where they lived for 47 years before moving to Greenspring in 1998. Their greatest accomplishment, they agree, is their three children – Verona Gaston, Duane Wright and Douglass Wright. "We have a close-knit family. I think, if we taught them anything, it was good citizenship and the Golden Rule," Betty said. "Church always played an important role in our lives, too." They also have five grandchildren and eight great-grandchildren.

Betty said she loves their "life of freedom" at Greenspring, where they play on the on Greenspring’s Wii Bowling League. "He was a national champion, but he won’t tell you that," Betty said.

Their advice on staying married so long? "Survive," Ray said, laughing. "Also, I can’t imagine having two or three mothers-in-law."

"Seriously, I think our society has become throw-away," Ray said. "It’s too easy to give up. We were raised in the Depression era when the motto was ‘use it up, wear it out, make do or go without.’"

"Frankly I’m so glad we were born when we were," Betty said. "People trusted each other more and bonded in a way I don’t see today. I wish we could see more patriotism and trust. A little bit of that is missing today."