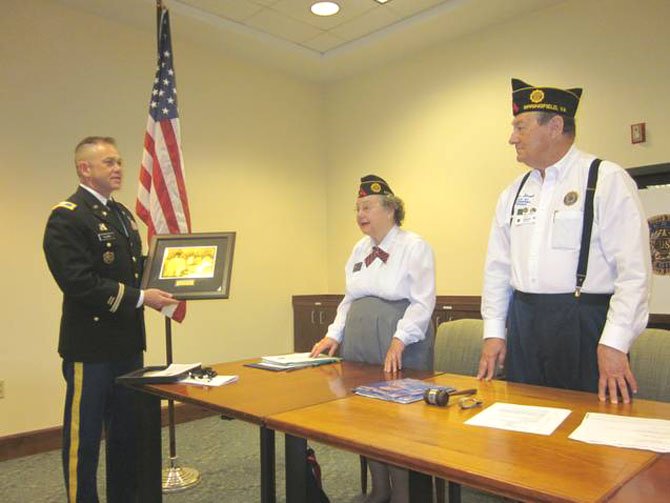 During a visit to Greenspring Retirement Village in April, U.S. Army Col. David J. Clark, chairman of the 60th Korean War anniversary committee, presents a commemoration plaque to Libby Haynes and Peter Straub, a Greenspring resident and Vice Commander of American Legion Greenspring Post 123. Haynes is the Adjutant and treasurer for the American Legion Greenspring Post 123. Other residents who received certificates for their service in the Korean War were: Wanda Driver, Dureta Wiecjorek, Mary Cormier, Jane Ford, Gail Reals, and Margaret Brewer. Photo courtesy of the Department of Defense 60th Anniversary of the Korean War Commemoration Committ

Elizabeth "Libby" Haynes, a Korean War veteran, displays the Certificate of Appreciation she received for her service.

Libby Haynes was in the middle of her freshman year of high school at George Washington in Alexandria when the Japanese Navy bombed the United States naval base at Pearl Harbor on Dec. 7, 1941. Nearly 2,500 Americans were killed in the surprise attack.

The following day, the United States declared war on Japan.

"One thing that young people don’t seem to grasp is how thoroughly every American supported the government during World War II. We were all united in the cause against Hitler," Haynes said.

Now 83 and living in Greenspring Retirement Village in Springfield, Haynes recalled her path to a military career, and her service during the Korean War.

Often referred to as "the Forgotten War," the Korean War (1950-1953) was bracketed by two bigger wars – both politically and in the number of casualties. In WWII, there were approximately 420,000 war causalities. In Vietnam, a conflict that spanned 10 years, approximately 47,424 were killed in combat. In Korea, more than 36,000 lives were lost. (Information provided by the Department of Defense.)

Like many women in the 1940s, Haynes’s path to a military career began with the Cadet Nurse Corps (CNC), a program sponsored by the United States Public Health Service to train nurses for service in World War II, a time when the demand for nurses outstripped the supply.

In 1944, she graduated from high school two days after her 17th birthday, and promptly signed up for the Cadet Nurse Corps. "They said you had to be a high school graduate, in good health and mentally alert. I qualified," Haynes said.

The "war job with a future" offered free training with pay, room and board, and uniforms. In ads for the CNC, applicants were assured they could wear "something frilly and feminine" for dances, and they would have time for dating.

"You have to remember that no one in 1944 knew how long the war would last. It could have gone on for another 10 years for all we knew. We were in the midst of it, and it was a terrible time," Haynes said.

WHEN THE WAR ENDED in 1945, so did the government’s support of the Cadet Nurse Corps. Haynes could have continued, but it would be at her own expense. She decided to pursue a degree in math at George Washington University, and eventually went through the U.S. Air Force’s Officer Candidate School, graduating second in her class. She served her time during Korean War in the Air Weather Service at Pepperell Air Force Base in Newfoundland. 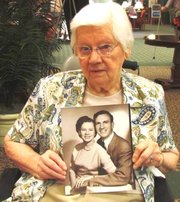 Dureta Wiecjorek, who served as a nurse during The Korean War, displays a photo of herself and her husband, Albert, shortly after they were married on Valentine’s Day in 1953.

Like Haynes, Dureta Wiecjorek also served as a nurse in the CNC. During a commission in New York, she met her future husband, Albert, who was one of her patients.

"We weren’t supposed to fraternize with the patients, but we did start dating and that got us into some trouble with the military," Wiecjorek said. In 1951, she applied for and received a commission at St. Albans Naval Hospital in San Diego. Albert followed her to San Diego and they married on Valentine’s Day in 1953. They have two sons. Wiecjorek, now 86, also worked as a civilian nurse for the Fairfax County Health Department as well as volunteering at the Pentagon.

According to the Department of Defense, nearly 120,000 women served in Korea during the conflict. Many, like Haynes and Wiecjorek joined through the nurse corps or Mobile Army Surgical (MASH) units.

"During the Korean War, women in the Armed Services went from being a footnote in history to a source of labor and skills for the nation’s military," Clark said. "These women volunteered to serve their country at a difficult time. They should be remembered for their patriotism and personal sacrifices."

After the armistice was signed on July 27, 1953, South Korea was set on its path to become a democracy and a staunch ally of the United States.

"Korea was a victory for the United States," Haynes said. "It is a shame that the Korean War has become known as ‘the forgotten war,’ Because of our intervention, the communists were prevented from overrunning Southeast Asia."

HAYNES, NOW 83, said she also thinks that people today have "a much healthier attitude" when acknowledging the sacrifice of veterans.

"I think we are learning to separate respect for the troops from how people might feel politically about a war. You know that saying, ‘Love the Army, and Hate the War.’ That’s what I think is important."

"People would ask me if it was exciting. I liked to say ‘not if I did my job right.’"

Haynes did meet her husband, William, a transport pilot, at the RCAF Station in Newfoundland.

"I briefed him on the weather like I did many times every day. She married William Haynes in 1954, and they had a son and three daughters. William died in 1991. "I didn’t know when I met him that he was special. He was a good guy. "