Shaping an early career in comedy.

Hoover Middle School’s Gabriel Stopak might be the next Jay Leno or Dave Letterman. The 13-year-old displays no reticence at standing up in front of an audience of adults and presenting his comedy routine.

“My brothers have always thought I was hilarious,” he said. “For the past year, I’ve been performing at ‘Open Mike Night’ at several establishments — and making everyone laugh. Sometimes I get heckled for being the only kid on the stage, but after I begin my routine, they mostly just laugh — and then applaud.”

His dad, Bernie Stopak said, “Gabriel has always had a terrific sense of humor combined with an extraordinary amount of common sense. He comes up with quips and responses to situations that are just downright funny. Everyone in our family does a double-take at some of his comments.” 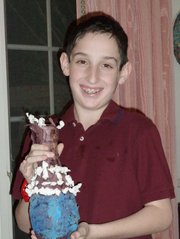 Gabriel first appeared last year at an open mike night in Annapolis with his brother Jack. “I was so nervous — and I did not get one laugh at all. My routine was only a few minutes — but it was a really long few minutes,” he said. His latest routine was delivered at the FruitBat Restaurant in Washington D.C. and he has also performed at Finnegan’s Sports Pub. “It gets easier each time I get up there,” he said.

Gabriel mostly shares stories about life as a 13-year-old, as well as the many dramas that take place in middle school. He makes up all his material and often changes it as he goes. Before he performs, he rehearses at home, trying out his material on his family. However, he gears each performance to the audience’s laughter and acceptance.

“I get a little nervous before I start,” he said. “But I love it once I am on-stage. It’s great to make the audience laugh.”

Gabriel also enjoys art, and has created many abstract paintings as well as sculptures and drawings. He has shown talent in painting and sketching since he was 6 years old. His goals? He’s unsure, but maybe one day he will be performing as a stand-up comedian in night-clubs or on TV. Or perhaps he will combine his artistic talents and his comedic routines to create his own comic books.