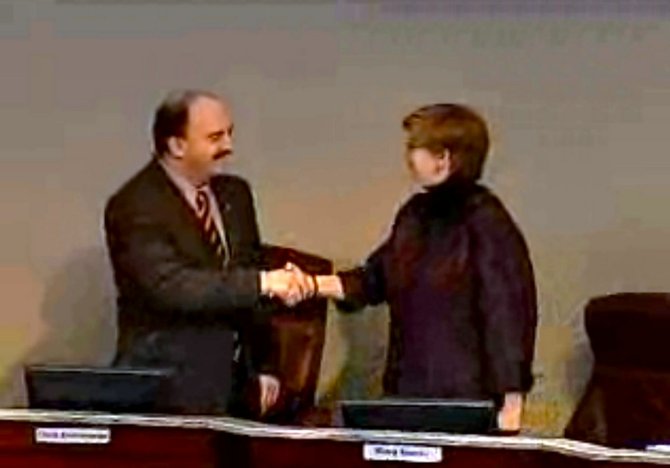 One day, about 30 years ago, Mary Hynes became concerned when she learned that one of the school system’s programs was about to be cancelled. So she made an appointment with the finance director of Arlington Public Schools, Joe Guter, a retired Marine with a buzz cut and gravelly voice. She made her made her case and waited patiently for a response.

"Look," said Guter, according to Hynes, "the School Board isn’t going to provide this service any longer because it doesn’t have to."

Then he said something that surprised Hynes, who was then a young mother unaccustomed to dealing with government officials. He told her that Arlington County is the kind of place where a persistent, thoughtful, constructive person could make a difference.

"I walked out of his office thinking, ‘Hmm. I can be persistent, thoughtful and constructive,’" Hynes recalled.

A FEW YEARS LATER, she got herself elected to the School Board. A decade later, she stood for election for the County Board. Now she’s become chairman of the board. But she hasn’t forgotten that meeting with Guter. During the County Board’s annual organizational meeting this week, Hynes outlined a plan to increase civic participation in Arlington. She framed the initiative as a way to reinvigorate what county residents call "The Arlington Way," an amorphous concept used to describe how residents interact with their government.

"This will not be an exercise," said Hynes. "It is not simply about checking a box on civic engagement. Our goal is for more members of the community to be involved — actively and constructively — in the important local government decisions that affect their lives and those of their neighbors."

Part of the initiative will be creating new weekly open-door sessions for all County Board members, which will be from 7 p.m. to 9 p.m. at a rotating series of county facilities and community centers. In addition to that, County Manager Barbara Donnellan has announced that she will make civic engagement a part of the employee engagement process. The centerpiece of the reinvigorated Arlington Way will be a community map, an initiative that will be launched at an open house this winter. The meeting will be open to everything from Kiwanis and parent-teacher associations to civic associations and churches.

"Our hope is that this expands our understanding of what each Arlington group does, improves connections between groups and enhances community dialogues and civic decision making in the future," said Hynes, "and becomes a valuable resource for each Arlingtonian, newcomer and old-timer, teen to senior, seeking to make connections in our community." 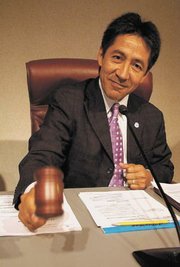 WALTER TEJADA was elected vice chairman of the board for 2012, and he outlined an agenda that includes what he called an "urban agriculture initiative." Along with board member Jay Fisette, Tejada plans to appoint an Arlington County Urban Agriculture Task Force of volunteer citizens and county officials. The purpose will be to research best practices in sustainable agriculture policies and programs, eventually making recommendations to support and expand existing urban agriculture efforts in a way that is consistent with the existing community values.

"My hope is that we can develop and inventory of existing programs and activities, identify gaps and explore new options such as rooftop gardens, land exchanges, demonstration gardens and — ahem — backyard hens," said Tejada, prompting laughter at the Arlington County Government Center.

Outgoing board chairman Chris Zimmerman called for an increased sense of urgency on affordable housing, which he called "the most difficult challenge" that the county faces. Calling for "increased action" on the issue, Zimmerman suggested that that the county establish long-term targets to measure progress on retaining affordable housing. He also called for substantially increased funding for the Affordable Housing Investment Fund.

"Arlingtonians have reason to feel pleased with what we have achieved to this point and optimistic about the future," said Zimmerman. "But we are not smug; we recognize that times are still hard for many, including right here in our otherwise prosperous community."