Possible community center expansion, change in water providers on the horizon in 2012. 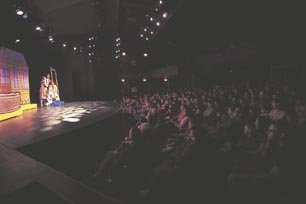 The Alden Theatre at the McLean Community Center underwent a renovation last year, and the MCC is looking at more facility renovations in 2012. Photo Contributed

McLean — The McLean Community Center will spend 2012 further exploring the possibility of expansion and renovation. The governing board has looked at things such as a theater downtown, a fitness facility and others, as brought to the attention of the board.

In December, the MCC released the results of their telephone survey in a report titled, "McLean Community Center Current Usage and Priorities for Future Expansion." The report was based on 739 completed phone interviews.

According to the report, more performing arts and lecture programs were the most common requests for future programming, and almost two-thirds of respondents said it was "very" or "somewhat" important for the center to expand programs offered to senior citizens.

Expansion is one of the possible uses for the surplus money in the MCC’s general fund. With the McLean Citizens Association recently issuing a resolution for the board to find a way to use the surplus, MCC board President Kevin Dent says they hope to make progress this year.

"We don’t want to make any decision about the future without first doing our due diligence," he said. "We’ve had some ideas that didn’t pan out, but we’re always evaluating, looking for the best situation."

The Alden Theater underwent a seat renovation last fall, making the theater more comfortable and more accessible. Dent said the board is examining more renovation possibilities in the existing center, such as the restrooms.

THE FAIRFAX COUNTY Board of Supervisors passed an ordinance last year saying that the Fairfax County Water Authority would be the exclusive provider of public water in the county, which will go into effect July 1.

This was in response to more than 109,000 county residents, many of whom reside in the McLean area, being charged higher water rates by Falls Church Water.

According to the annual report from the McLean Citizens Association’s Budget and Taxation Committee, "over many years Falls Church was able to transfer about 25 percent of its surplus water revenue to its general fund, amounting to about $59 million over 28 years."

Fairfax County brought a successful lawsuit to stop the transfer in 2010, but suits are still ongoing when it comes to rebates to customers who were overcharged.