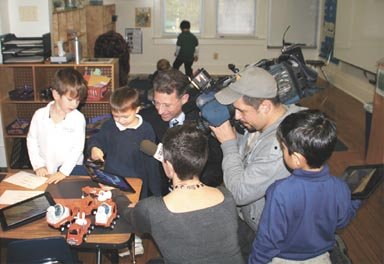 By By Marian Cavanagh

Vienna — Flint Hill School, whose advanced integration of technology into the teaching and learning process is earning national recognition, has announced that it is upgrading its existing 1:1 laptop program in Grades 5-12 from the current MacBook to the new, state-of-the-art 11" MacBook Air. The transition is expected to be completed in mid-January, by which time more than 1,100 new computers will be up and running on the school’s two campuses.

Earlier this fall, school leaders began considering the change to the MacBook Air because they felt it was a better technological tool for its students, says Headmaster John Thomas. "It’s lighter, smaller, easier, faster, more durable, and includes some great new Wi-Fi and Bluetooth technologies. All of these features will allow our students more opportunities to work on critical thinking, creativity, and collaboration anywhere and any time."

Technology has long been an integral part of the daily lives of Flint Hill’s students and teachers; but in the past few years the school has taken on a leadership role in exploring and applying how technology can be used in its classrooms. It is now one of the few schools in the country where every student, ages 4 and up, has immediate access to an iPad or MacBook. The 1:1 initiative was introduced in the fall of 2010 for students in Grades 5-12; this year, the program was further expanded to provide iPads for all students in junior kindergarten through fourth grade.

These efforts led Apple to designate Flint Hill School as the "Apple Site Visit School" for the State of Virginia. Now, schools around the country are visiting Flint Hill to learn how technology is being used — not just in the Upper School, but all the way down to its youngest students.

Upper School students in the Library.

The fact that 4- and 5-year-olds are already so comfortable with the latest technology caught the attention of Channel 9 News Anchor Mike Hydeck, who produces a feature for the station titled "Cool Schools," which spotlights innovative programs taking place in schools across the Washington, D.C. area. He came to the Junior Kindergarten classroom to film the children working with their iPads. (The feature can be viewed at: http://www.wusa9.com/news/virginia/article/178888/188/Cool-Schools-Flint-Hill-School).

"I was so pleased with how the [junior kindergarten] students handled the morning," said teacher Leslie Viente. "We had many people in the room and a cameraman moving all around, and they seemed oblivious to all of that. I was amazed to hear reactions from the Channel 9 team about the incredible work the [junior kindergarten] students were doing. We didn't want the iPads to become a new ‘video game.’ The visit confirmed that this was not the case, and the Class has learned some amazing skills!"

Shannan Schuster, Flint Hill School’s Dean of Faculty, agrees. "It’s not that the lesson is enhanced because of the integration of technology," she said. "It’s that the technology is essential to the lesson, and the end result is deeper, more meaningful learning."