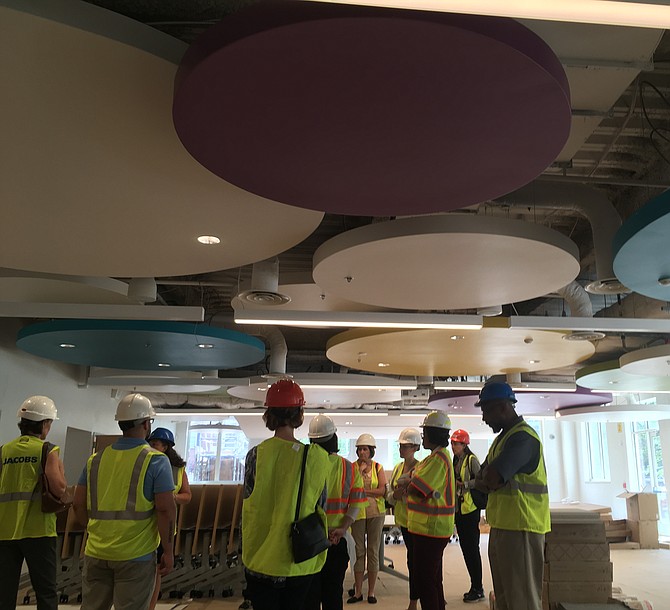 City and school employees tour the first floor cafeteria. The setup, once complete, will include small tables for a “family feel,” said Principal Rachael Dischner. Photo by Dan Brendel/Gazette Packet 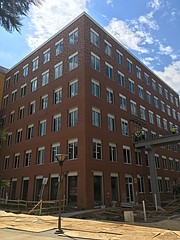 An outside view of the new Ferdinand T. Day Elementary School. 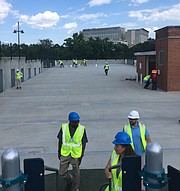 A playfield built on top of the school’s adjacent parking garage. Once complete, the space will include biome-themed painted surfaces, playgrounds, picnic tables, a soccer field, and a basketball court. A covered bridge will connect the playfield to the school building. 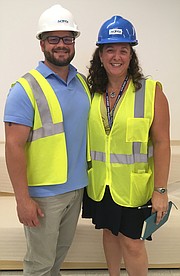 The public school system prepares for the school year, putting the finishing touches on its new Ferdinand T. Day Elementary School, a refurbished office building in the city’s West End.

The new campus comprises the first four stories of a six-story building at 1701 N. Beauregard St., plus an adjacent parking garage with a playfield built on top. General spaces, such as the cafeteria, a physical activity area, the health and dental clinic, the music room and administration, will occupy the first floor; grades K-1 the second; grades 2-3 the third; grades 4-5 the fourth. However, the design aims for “maximum flexibility,” so that any floor could accommodate any grade, said Principal Rachael Dischner. The fifth and sixth floors will become school system administrative offices.

While the school intends to accommodate 700 students, it will start with 450. The reason is that the school system will phase in redistricting over two years, said Helen Lloyd, a school system spokesperson. Current fourth and fifth graders in the new school’s district can grandfather in to their present schools, either William Ramsay or John Adams. After two years, the grade levels at the new school will fill out and enrollment will climb.

Refurbishing an existing building, rather than building a new school, is both faster and cheaper, said Richard Jackson, the school system’s director of education facilities. The new school overhaul, which City Council approved in September, will have wrapped up in less than a year. Total project cost weighs in at $37 million — $15 million to buy the building and garage, plus $22 million to renovate. For a rough comparison, the new Patrick Henry PreK-8 school, under construction since June 2017, cost $62 million.

“School designs should focus on creating collaborative and adaptable learning spaces supported by a robust and seamless integration of technology and flexible and ergonomic furniture,” according to 2015 design guidelines developed jointly with the city. Along these lines, the new classrooms contain movable furniture, including tables suited for small groups. Every classroom has a SMART Board — a large, interactive wall screen — and a document camera. In addition, classrooms for kindergarten will be outfitted with iPads; grades 1-2 with shared laptops; and grades 3-5 with Chromebooks for every student.