By By Cynthia Cross

McLean — To most people, the shopping bag is the most mundane of objects, used and then quickly forgotten about once the contents are removed. But to McLean resident Howard Forman, the shopping bag represents infinitely more: a cultural icon, a fragment of history, a piece of conveyable art, an emotional tie to the wife he lost to cancer three years ago and right now, a very, very absorbing hobby.

"The collection is a tribute to the work and memory of my wife. She was the force behind it - it was part of what drove her."

Forman is the dedicated caretaker of a vast and impressive collection of bags begun by his wife Lee in the early 1970s and meticulously built by the couple over the next 40 years into its current imposing size, which Forman estimates at over 7,000 items. A portion of these reside in Forman's historic McLean home, originally a farmhouse built in 1854 and rumored to be a stop on the Underground Railroad. Bags fill dozens of countertops, shelves, tables and other surfaces, and bag-shaped lamps, sculptures, trinkets, paintings and other artwork adorn the floors and walls of nearly every room. But the bulk of the collection is housed above Forman's garage, in several temperature-controlled and fireproofed rooms where Forman is consumed by the seemingly endless task of cataloguing the enormous - and still expanding - collection. 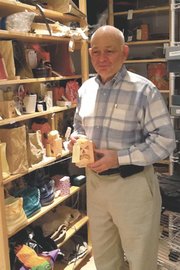 Howard Forman in one of his bag storage rooms.

THE COLLECTION was born as a series of Bloomingdales bags that Lee Forman accumulated when she worked at the department store in White Flint, Md. beginning in 1971. "She didn't see it as a collection at first," says Forman. "Like a lot of people she kept the bags just because she liked them so much." But the bags quickly multiplied well beyond department store-issue. When the family sold its wholesale liquor business in 1999, the Formans gained both the time and the means to acquire serious collector's items and to build an enormously varied collection that today includes items dating from as early as the late 1800s and originating from as far away as Helsinki, Finland.

There are bags from nearly every presidential election campaign since 1948 (Forman lent five of those - two from the Barry Goldwater campaign and one each from the campaigns of Hubert Humphrey, George McGovern and Bob Dole - to the Minneapolis Institute of Art for an exhibit during the 2008 Republican National Convention). There are bags produced and signed by famous artists including Andy Warhol and Roy Lichtenstein; there is an Elvis Presley-autographed bag that once held a cheeseburger, and one containing a 45 rpm record signed by all four Beatles. There are bags with themes from sports (the 1952 Olympics) to world events (Queen Elizabeth's Silver Jubilee in 1977, and the 1981 English Royal Wedding) and bags made by companies from Apple to Fendi to Hermes. There is a book on cooking with paper bags published in 1911 and a rug made from plastic bags, and there is an original model of a bag-making machine used for a patent issued in 1863. The variety is breathtaking, but what all the items have in common, Forman points out, is their connection to history. "All these pieces represent history to be preserved," he says. 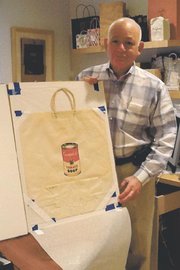 Howard Forman holding a bag produced and signed by Andy Warhol, with the image of his iconic Campbell's Soup can.

To that end, the Formans set out in 2002 to start a museum of bags. They formed a non-profit entity for that purpose and spent the next several years researching what it would take to open and maintain a museum. Recognizing the need for substantial outside funding not only for the museum's opening but for its upkeep, they launched the museum's website (www.museumofbags.org) in 2007, hoping to attract donors. It was about this time that Lee Forman was diagnosed with cancer, and the museum idea stalled. Since her death in March 2009, Howard has continued collecting in her memory, and is still exploring possibilities for permanently exhibiting the collection. He did meet with two Smithsonian officials who were intrigued by the collection. "The person in charge of political objects on display at the Museum of American History told me that he'd been collecting political stuff for a long, long time but had never thought about bags. He thought this was amazing."

In the meantime, the collection grows daily.

FORMAN JUST ACQUIRED - from a graphic designer in Wichita - nearly 1,000 bags that now sit boxed and waiting to be analyzed and catalogued. It is a monumental task, but one that Foreman clearly relishes, for two reasons. "The collection," he says, "is a tribute to the work and memory of my wife. She was the force behind it - it was part of what drove her. And second, there is a history in bags that I believe is worth preserving and telling."