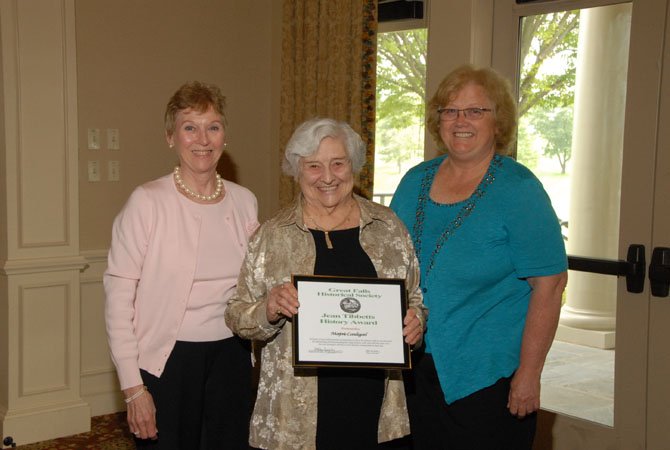 Marjorie, who is originally from Indiana, earned her Undergraduate and Masters degrees in Chemistry from Purdue University. She and Bob, her husband of over 60 years, moved to Syracuse where she became a high school math teacher "because they needed one." After the Lundegards moved to Great Falls in the early 1960s, Marjorie taught science at Oakton High School, where she became one of the sponsors and coaches for the school’s "It’s Academic" team. Both Fairfax County Public Schools, and the Washington Science Teachers Association have recognized Marjorie as an Outstanding Teacher of Chemistry. She retired in 1988 and, finding she had time on her hands, decided to lend her talents and energy to the Colvin Run Mill. This led her, in turn, to an interest in mills, which were quite important as the economic and social focal points of their areas.

Marjorie said this all started accidentally. Over the years, as she and Bob planned short trips, they decided to incorporate a trip to a mill. Her writing career started with articles in the Colvin Run Mill Newsletter called "On the Road With Marge and Bob."

HER FIRST PUBLICATION was Grist Mills of Fairfax County and Washington, D.C., published in 2000. Since then, she has catalogued and documented mill sites in Fairfax County, in nearby Loudoun and Fauquier Counties as well as Rockingham, and Gloucester Counties, Lynchburg and numerous counties in between. She has also written about mills and mill sites in Maryland, Pennsylvania, and Delaware, bringing her total to 22 publications – and she is planning now for some fall trips. She has identified mills and mill sites, some of which are either in ruins or totally destroyed, documenting them with photographs and drawings. She has incorporated local history obtained from reference materials and from interviews with owners, staff members, and neighbors of the mills as she has visited them. All the proceeds from the sale of her books benefit the Visitors’ Center at The Colvin Run Mill. Her love of teaching brings her to Colvin Run Mill every Tuesday and Wednesday where she still serves as a Docent, leading school groups on tours, saving Thursdays to volunteer in the Colvin Run General Store. In her spare time, she spends two days a week in McLean at the Treasure Trove, whose profits are given to Fairfax Hospital. Marjorie and Bob have one son, Paul, who lives in California.

SINCE THE FIRST AWARD in 2006, the Great Falls Historical Society has honored Milburn Sanders, Karen Washburn, Tanya Edwards Beauchamp, Naomi Whetzel, Bill Garrett, and Connie & Mayo Stuntz. Their names are inscribed on a plaque, which is displayed in The Great Falls Library.