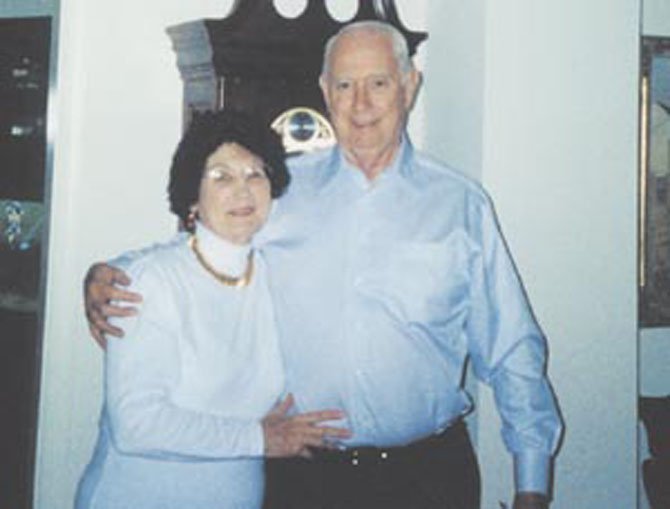 Beverley and Preston Mulford together. Photo by Photo Contributed.

Centreville — Well-known in the local area, the Mulfords have lived and operated the Mulford School here for decades. But on Jan. 6, the family’s patriarch, Preston Mulford, died at age 82.

“He had been very ill for six months,” said his wife Beverley. “He had a bad heart and lungs, and they just gave out. We all knew it was coming, but it’s still hard when half of you is gone.”

She and her husband met in 1949 when they sat beside each other in ethics class at Maryville College in Maryville, Tenn. Preston Mulford was reading ‘Cheaper by the Dozen’ in class and she was reading over his shoulder. 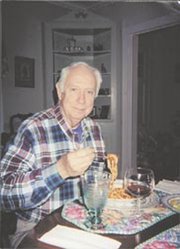 Preston Mulford at home, enjoying his favorite meal of spaghetti.

“I asked him how he expected to get a good grade if he wasn’t paying attention,” she said. “So he bet me a movie and a hamburger that he’d get a better grade on the test than I would. He won, and that was our first date.”

“Preston was also a good dancer,” said Beverley Mulford. “We danced in the college gym every night after supper. He was the kindest person I ever knew – and that’s the word people used about him in every [condolence] note I’ve received.”

They married in 1952; this coming June 14 would have been their 60th anniversary. The couple settled on Old Centreville Road, by Little Rocky Run, and there they raised four sons, Hudson, now of Richmond; Phillip, Warrenton; Gardiner, Culpeper; and Harry, Centreville. They also have 16 grandchildren, one great-grandchild and another on the way.

Preston Mulford was the 10th generation of Mulfords in the U.S. The first generation came over in 1643 and helped settle East Hampton, Long Island. “He was very proud of his heritage of the Mulfords helping settle this country,” said son Harry Mulford. “One of the first Mulfords on Long Island was a judge known for his fair treatment of the Indians.”

The Long Island Mulfords were whalers, and one of the most famous of them was Capt. “Fishhook” Mulford. He traveled back to England several times to meet with the king to argue against taxation without representation.

“This was 100 years before the Boston Tea Party,” said Harry Mulford. “He got his nickname because, when he was in England, he lined his pockets with fishhooks to guard against pickpockets. And he was successful in getting the whale-oil tax removed.”

Harry Mulford mentioned his ancestors, he explained, because “These were bold men — self-starters who were highly motivated, like my dad. He was born in 1929, at the start of the Depression. Even as a boy, he did odd jobs, such as a paper route, to help out his family with money.”

Preston Mulford later received an academic scholarship to college and, afterward, he obtained a law degree from Rutgers University. After being drafted and serving in the Army, he was an attorney for an insurance company and then became a stock broker.

“He started with Merrill Lynch and then opened some of the biggest brokerage firms in Washington, D.C., today,” said Harry Mulford. “The last one was the Mulford Group.” Preston Mulford then ran that brokerage office in Centreville until a year ago.

Meanwhile, in 1960, Beverley Mulford began the Mulford School — teaching preschool through kindergarten — on the family’s property near Little Rocky Run. Years later, it moved to its present location along Route 29 in Centreville; Beverly Mulford still runs it and teaches there.

“In 1960, there were few women business-owners, but my dad supported the Mulford School in every way, since its inception,” said Harry Mulford. “He was always so proud of the school and what it stood for. He did everything from helping design it to running out for apple juice.”

Beverley Mulford taught horseback-riding, and Preston Mulford helped her on the weekends. Knowing school was a new experience for the young students, said Harry Mulford, his father “wanted to make them feel like they were part of a family. And in the last few years, he’d greet the children at the door, like a grandpa, to make them feel welcome.” 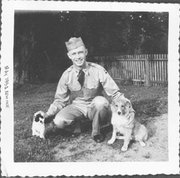 This photo of soldier Preston Mulford with his dogs was taken in May 1954.

When their sons were younger, said Beverley Mulford, she and her husband were busy with them, the school and their horses. “Preston was an excellent father,” she said. “The children did fox-hunting and were in Pony Club, and he took them back and forth to all their activities.”

They also enjoyed their life together as a couple, playing bridge, going to movies, dancing and traveling. When the children were grown, the Mulfords visited Greece, England and Ireland; and until four years ago, they went swing dancing twice a week.

No matter what she looked like, said Beverley Mulford, “Preston always told me I was beautiful.” Besides that, she said, “For 20 years, he let me go off for 10 weeks each summer to help a friend who’d started a summer camp in Fredericksburg — and he helped, too.”

Last year, however, his health took a turn for the worse and he could no longer do all the things he wanted to do. “We had full-time hospice help, plus live-in help,” said Beverley Mulford. “He was bedridden, but he never complained.” Then on Jan. 6 at 1:30 a.m., he died at home.

Since then, his grieving wife has been taking things one day at a time. Some days are good and some are bad; but most of all, she said, “I miss the other half of me.”

“It’s very hard,” added Harry Mulford. “He was a big part of my life. Growing up, we lived on a farm in Centreville with eight to 10 horses. He taught me a lot about horses and took such loving and tender care of them. He also taught riding with my mother.”

Funeral services were held Sunday afternoon, Jan. 15, at St. Paul’s Church in Haymarket. Graveside services for the family were Tuesday, Jan. 17, followed by burial at Fairfax Cemetery in Fairfax. In lieu of flowers, memorial contributions may be made to Hospice or to the Mulford School Scholarship Fund, 15105 Lee Highway, Centreville, VA 20121.

Describing his dad as generous, Harry Mulford said, “If his four sons needed something, he’d find a way to provide it. He didn’t drive a new car or take vacations while raising his family. He was also very forgiving when we got into mischief. He’d let you know what you did wrong, but then he’d move on — and that was one of the most important traits he passed on to us.”

Besides riding horses, the four Mulford boys played baseball, basketball and football. Yet busy as their father was, said Harry Mulford, he never missed one of their sporting events. He also shared some of his wisdom with his children.

“When I asked him what parenting advice I could pass down to my children, he said, ‘Son, always be the better person,’” said Harry Mulford. “And he lived his life like that. So his death is a tremendous loss, from all different aspects of my life. It’s also a huge loss to the community.”

“He’ll be tremendously missed,” continued Harry Mulford. “He was a good husband, a good businessman and a good person. I’m very lucky to have had him as my father.”