"Progeny" at GMU’s School of Art

Beginning Feb. 1, George Mason University’s School of Art and the African and African American Studies Program present "Progeny," a photography exhibition that is the first collaborative effort between Deborah Willis, an artist who received her doctorate in cultural studies from George Mason University in 2000, and her son, Hank Willis Thomas. 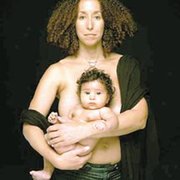 "Progeny" originally appeared in the Miriam and Ira D. Wallach Art Gallery at Columbia University in New York City in 2009, and will be featured at GMU’s Fine Art Gallery in the Art & Design Building from Feb. 1-29.

Named one of the "100 Most Important People in Photography" by American Photography Magazine, Deborah Willis received her doctorate in cultural studies from George Mason University in 2000 and now heads the photography and imaging program at the Tisch School of the Arts at New York University. She is the recipient of Guggenheim and MacArthur fellowships. Her work focuses on the African American female form and she is considered one of the nation’s leading historians and curators of African American photography and culture.

The Galleries are located on GMU’s Fairfax campus. The Johnson Center Gallery is located on the main level of the George W. Johnson Center in the heart of the campus. The Fine Art Gallery is located on the ground floor of the Art and Design Building. The Mason Hall Gallery is on the ground floor of Mason Hall on Mason Pond Drive. Galleries are open Monday through Friday, 9 a.m. to 5 p.m., unless otherwise noted, and by appointment. The Concert Hall Gallery is open Tuesday – Friday, 10 a.m. to 6 p.m.

Hank Willis Thomas investigates themes of identity, history and popular culture and critiques advertising and cultural norms through his work, which also focuses on African American subjects. He received his B.F.A. through the Tisch School of the Arts and his M.F.A. in photography and M.A. in Visual Criticism through the California College of the Arts in San Francisco. His work is in numerous public collections, including the Whitney Museum of American Art and the Brooklyn Museum in New York, the High Museum of Art in Atlanta and the Museum of Fine Arts in Houston.