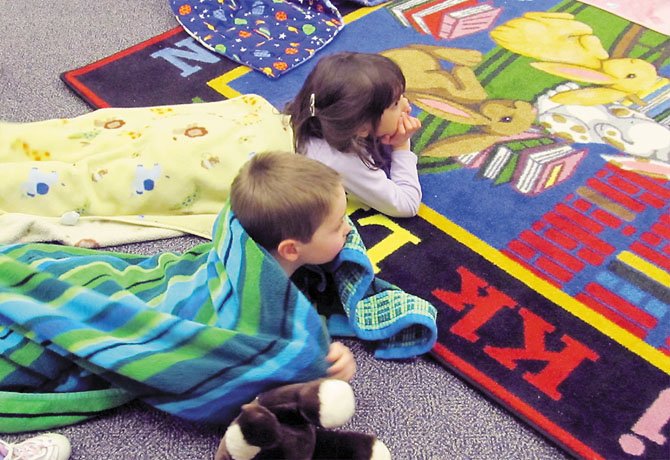 Wrapped in a robe dotted with polar bears, Turner asked the group of 12 pajama-clad preschoolers to pick a spot on the alphabet blanket. For an hour, she had them transfixed with several read-aloud bedtime and winter-themed stories during Twilight Tales at Kings Park Library on Tuesday, Jan. 24. 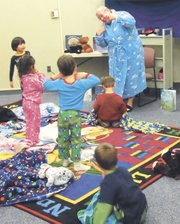 Kings Park librarian Twyla Turner leads preschoolers in a round of "If You’re Happy and You Know It …" during Twilight Tales at Kings Park Library in Burke Tuesday, Jan. 24.

"They love to wear their pajamas. That’s part of the fun," Turner said, adding that the program, which is at several county libraries, is perfect for winter, when parents need something to do with their cooped-up little ones.

A librarian for 30 years, Turner said she liked the interaction with children. "They certainly like to ask questions," she said.

"Why is the moon so yawny?" said four-year-old Brice Bartley, Jr. of Fairfax, when Turner opened one of the books.

"Did you know the moon would get tired?" Turner asked the group, who shouted back their opinions, everything from "Everyone knows that moons get sleepy," to "This is a silly story." 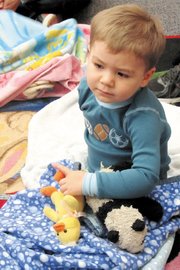 Will Fedor, 2 1/2, of Burke brought his stuffed panda and duck to listen to winter-themed stories read by librarian Twyla Turner.

Sheila Bartley said she brought her son, Brice, as a reward for being good at the dentist’s office. "I didn’t want to get him sweets, so I told him he could wear his pajamas to the library. He loved that," she said.

Neala Jones of Springfield, who brought her twins Aubrey and Alex, 3, said her twins love stories. "This is a fun way to get them involved in reading," she said.

Before the one-hour program, Turner told the preschoolers they could borrow any of the 30-plus books she had arranged around the room. The children were especially enthusiastic when Turner read "Good Night, Good Night Construction Site," a fanciful rhyming story of hardworking trucks who get ready to say goodnight.

"Does the bulldozer need to sleep? How about the crane?" Turner asked.

"Look. They get to sleep on dirt pillows. That’s cool," Brice said.

Turner wrapped up the evening with a Ladybug that shoots starlight on the ceiling. "Sleep tight, everyone," Turner said as the children thanked her and gave her hugs. "I will miss them," she said.

For more information on children’s programs and activities at Fairfax County’s public libraries, go to www.fairfaxcounty.gov/library and select a branch.