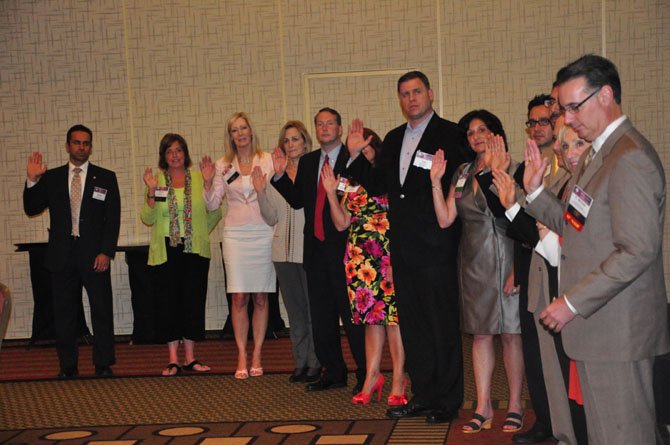 Members of the 2012-13 Greater Reston Chamber of Commerce board are sworn in Thursday, June 28 at the Hyatt Regency Reston. Photo by Alex McVeigh.

Reston — The Greater Reston Chamber of Commerce presented their annual Awards for Chamber Excellence (ACE) and welcomed their new board of directors Thursday, June 28 at the Hyatt Regency Reston. The chamber also celebrated its 30th anniversary, it was founded in 1982.

Karen Cleveland, who served as the first executive director and CEO of the GRCC and is current board member, recalled the early days of the chamber. “Back in the early days, there was no Dulles Toll Road and those who did have cell phones know they were more like bricks,” she said. “We needed a copy center, because most of us couldn’t afford our own copy machines.” 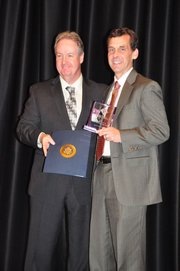 She also recalled how Reston “changed dramatically for the business community” with the opening of Reston Town Center in 1991.

C. Michael Ferraro of Training Solutions, Inc. was named incoming chairman of the GRCC. Ferraro currently serves with the Northern Virginia Technology Council, the Marymount University’s Board of Visitors for the School of Business and is chair of the Bite Me Cancer Foundation, a local nonprofit.

“In 2013, we want to start planing for our next 30 years, and if the current rate of growth continues, we could be seeing 80,000 residents and 4,000 businesses by then,” he said. “During this time, the chamber needs to continue its leadership role and make the right connections and set the right environment to grow business.”

SEVERAL AWARDS were presented to small, medium and large businesses, as well as member, new member and volunteer of the year.

The awards concluded with the presentation of the Joe Ritchey Pinnacle Award, which was presented posthumously to Donna Miller, of Miller Musmar CPAs. Miller, who passed away from cancer Dec. 24, 2011, served as president and treasurer of the Greater Reston Chamber of Commerce.

Joey Musmar, who was her partner, accepted the award on Miller’s behalf and remembered her as someone who was dedicated to the community around her.

“From the first day I met her I knew that she was somebody that knew exactly she wants,” he said. “She always used to talk about the importance of giving back.”

He recalled an incident when the Yellow Jackets were playing Kansas in the Elite Eight that year, with a trip to the Final Four on the line. They were up by three with 45 seconds to go, and Hewitt called a timeout and called a play.

THE PLAY worked to perfection, with Moore wide open at the three point line, so open that Hewitt said “he had time to check the wind before he shot.” But Moore instead passed it away to an unsuspecting teammate, who fumbled the pass, which led to a turnover and a game-tying three-pointer from

Kansas, sending the game to overtime.

“I had a couple of choices, I could have gotten on him, said ‘what are you doing? That was your shot’ or I could have told him, let’s not worry about what happened, let’s just move on, and we did, we went to overtime, and we won,” he said. “No matter how much you plan, no matter how much you prepare, you can’t predict the outcome… fighting through adversity will help you get past whatever short term setbacks you might run into.”