"He born a wild and restless spirit and unleashed it on the world," said Niall's mother, Susan Coti, "he was always an adventurer. He realized many of his dreams early in life." 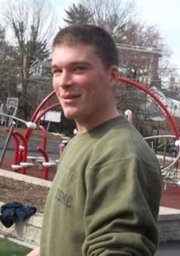 Music was Coti-Sears's passion. He began learning piano scales when he was 2 years old, and his love of music only grew. He began to take lessons at age 6 when he was enrolled at the Levine School of Music.

By the time he was in high school, he began to compose his own songs. His influences were vast and diverse, but he specifically liked to listen and play Chopin and Elliot Smith. "Niall always had weird tastes in music," said Ian Solheim, Coti-Sears's friend whom he had met at Hardy Middle School, "he was always showing me different bands. I learned a lot."

Coti-Sears enjoyed sharing his love of music with others. "He would compose music and he would play it for us," said his grandmother Mary Coti, who helped raise Coti-Sears, "he would play for our birthdays and holidays and Father's Day and Mother's Day. It was just so great."

His musical talent led Coti-Sears to become home schooled his senior year of high school so that he could focus on composing. After graduating, he enrolled in Dartington Music School in Devon, England.

After a year studying music in England, Coti-Sears decided to return to the states and join the Marines Corps. For many of his friends, this decision came as a surprise. His non-conformist attitudes seemed ill-suited for the military. But his attraction to adventure and his close relationship with his marine grandfather, William Coti, was enough for him to join.

Susan Coti believed it was her son's restlessness that motivated him to enlist. She remembered the one of the last things he had said to her before he joined in the summer of 2010. "Before he left, he looked me in the eye and told me: mom, I'm not afraid to die," said Susan Coti.

"I'm just going to miss his crazy antics. He always made me laugh."

Although Coti-Sears was not what many would call a typical Marine, he excelled in the Marine Corps. He scored in the top one percentile in the military's aptitude test, the ASVAB, and he was promoted to Lance Corporal. Even though he had the opportunity to place himself in less risky areas, Coti-Sears continually volunteered to more hostile areas.

“He hated the war," said Landis, "but he sacrificed himself for the people he cared about. He changed a lot of people's minds while he was there. He did a lot good being there."

When friends and family members learned of his death, many were crestfallen. "I'm just going to miss his crazy antics," said Susan Coti, "He always made me laugh."

For his grandmother, his death seemed unjust. "It's just a waste of life that he's gone," said Mary Coti.

For his grandfather, his death seemed to be the causal outcome of his actions. "He was always my protege," said William Coti, "he always wanted to be a Marine and he followed my example. It weighs heavily on me that this had to happen."

When Coti-Sears' mother told Solheim that he was bequeathed his guitar, he felt its meaning. "It was the most sacred thing we had," said Solheim ,"it means the most out of anything just because I don't think you can know someone 100 percent. But when he was playing I knew everything that was going through his head. I could focus on him 100 percent at that moment."

"He was just an amazing person. I'm completely devastated. He was indescribably great."

A memorial service for Coti-Sears is planned but no date has been confirmed.