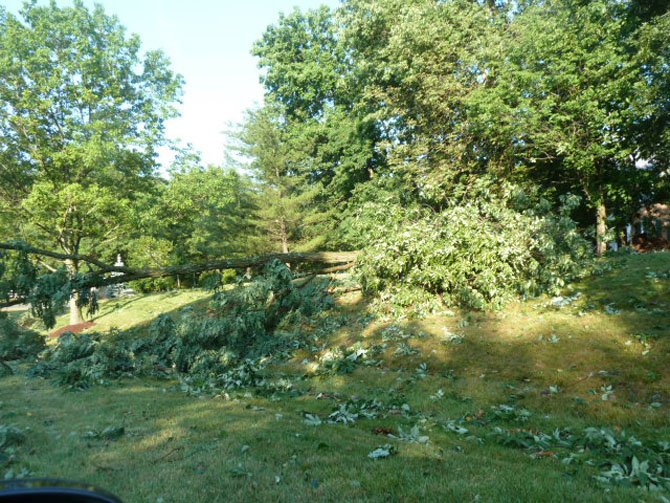 Even the AT&T Golf Tournament at Congressional Country Club was cancelled for the day. The parking crew turned disappointed spectators away, empty buses were lined up with no riders and many who had driven for four to six hours to view Tiger, Phil and Vijay were frustrated and angry. One of the parking crew said, “We’ve had a lot of different reactions to the cancellation of the tournament. Some people are really angry but others understand, particularly when they see the destruction in the area. Our parking lots had a lot of trees down and we could not park cars in them or even provide the buses with turn-around space.”

A pine tree toppled onto the car of Potomac resident Shelley Stuart. She explained how it happened: “I parked my car at a friend’s home tonight because we were going to see a movie. While we were gone, a huge pine tree fell on my car — so my car is demolished. I couldn’t even get to it because another tree was blocking access to my friend’s home.”

Local tennis, swim and golf clubs had to close for Saturday because of lack of power as well as downed trees and debris. Head pro John McDaniel arrived at 6 a.m. at the Potomac Tennis Club to find screens damaged, tree debris covering all 10 courts and electrical power lines down all along Potomac Tennis Lane. “Last night, it felt as if a tornado was going through,” he said. “The winds were so forceful — I knew we were going to lose power and have damage. I think the weather forecast is the same for tonight. It seems that it may be awhile before power can be restored.”

What are residents planning to do if the power does not come on? Some will go to the movies or shopping (if shopping centers and movies have power), some are heading out to the beaches or the mountains — and others are planning to spend a lazy day relaxing.