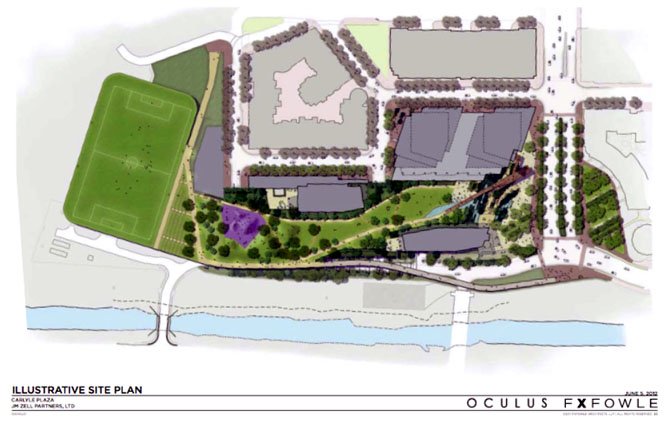 Site plan for the 5 acres of proposed green space to support the growing number of residents and workers in the Carlyle Towers area.

Site plan for the 5 acres of proposed green space to support the growing number of residents and workers in the Carlyle Towers area.

Alexandria — On June 16, city council voted 7-0 in approval of Carlyle Plaza and Alex Renew's "green block," or about 5 acres of proposed green space off of Eisenhower Avenue. The project confronts several architectural and environmental challenges to provide an open green space for the growing number of residents and workers in the Carlyle Towers area.

"There were so many complex constraints," said Dan Kaplan, architect from FX Fowle, "we really needed to be facile to solve them."

Additionally, Carlyle Plaza must build a parking garage to serve the growing number of residents.

Secondly, Alex Renew, formerly known as the Alexandria Sanitation Authority, must abide local and state environmental laws. Along with LEED silver accreditation, Alex Renew must comply with Virginia's Chesapeake Bay Preservation Act, which requires a reduction of 62 percent nitrogen from the treated wastewater. With Alexandria's projected population of 25 percent in 40 years, increased efficiency in wastewater treatment alongside increased urbanization is a concern.

To increase needed parking and comply with LEED silver standards, the design plans to conceal both the municipal sewage tanks and the parking garage beneath the green area.

Finally, the development is to be built on contaminated soil. Throughout the early and mid part of the twentieth century, the area was home to a municipal incinerator, which would cover the soil in ash. Furthermore, many local residents would use the space to dump used appliances. As a result, many metals, paper, glass, ash, and even petroleum have contaminated the soil.

Since then, the land has been reclaimed. However, no developer is allowed to dig more than 18 inches into the soil. This makes a standard green space almost impossible to develop.

WITH THESE CHALLENGES before them, Carlyle Plaza contracted landscapers and architects from the firms, Oculus and FX Fowle, to find a solution.

To resolve the density issue, designers decided to create the green space on top of an above ground parking garage. The space includes an open field, trees, and a "creative play" area, a space where children can play on rolling hills and valleys.

The green space includes a multi-purpose field, a "creative play" area, passive green space, and a water feature. The water feature is also a part of the water filtration system that helps AlexRenew comply with Virginia's Chesapeake Bay Preservation Act.

"As a mother, I am very excited for the play area," said Karen Pallansch, CEO of Alex Renew, "this is more open and unstructured."

To treat the runoff water, developers designed a series of bio-filters along the stair entrance. Thus, the runoff will be treated and later used to irrigate the open spaces and fill the nearby water feature.

Because accessibility was another concern, designers included a pedestrian-bike path that connects the green space to the ground level. The path will be connected to the greater Mount Vernon bike trail, and will have a gradient of 5 degrees to allow for an easy walk or ride.

Finally, the sewage treatment tanks will be concealed by an open, multi-purpose field. "I would see the pocket parks where people will fill them up," said Carlyle resident Bill Harvey, commenting on the need for a field, "there would be 30 to 40 people fill up these little spaces."

Architect Dan Kaplan was excited about this project and described it as a good example of green urbanism. "Everything had to be integrated," said Kaplan, "the wastewater, the green space, the parking, the network of open space, and the architecture had to be integrated."

Harvey, who also worked for the Army Corps of Engineers for 28 years, applauded the design. "I've been a supporter from the beginning," said Harvey, "and I think their design has improved from the beginning. And they are not finished yet."