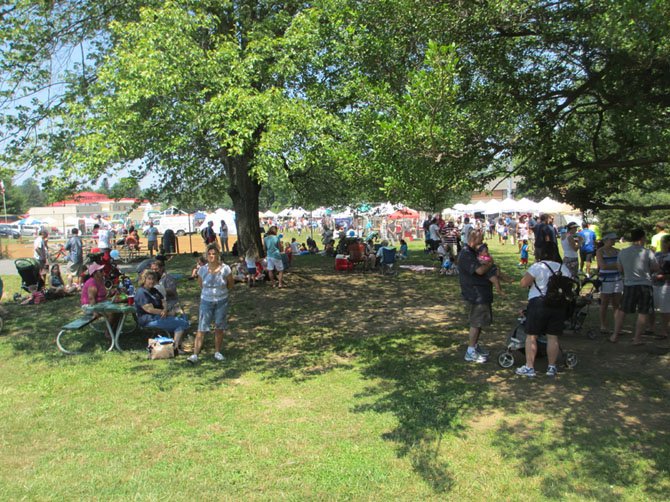 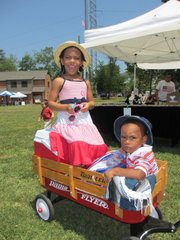 It may not be the royal carriage but a wagon pulled by daddy in the blistering heat is the second-best thing. Sophia Beckford, 4-1/2, and brother Adrian, almost 2, come from McLean to have fun at the Vienna Independence Day festival.

Eight-piece classic rock band Ron Moody and the Centaurs kept the mood upbeat even during the day’s 98-degree heat, opening their performance at 12:15 p.m., shortly after the Vienna Police Department Honor Guard presented the colors. The Vienna Community Band played from 11 a.m. to noon.

While Memorial Day and Veterans’ Day have solemn implications, Independence Day is all celebration.

And Vienna looked much the same way small towns across America probably looked. 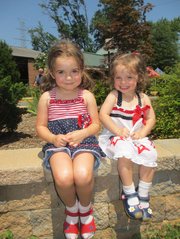 Grace Taylor, 3, and her sister Anna, 2, of Vienna show off their best July 4th smiles.

For the young children, the highlight of the festival was the amusement "rides," from rockclimbing and tunnel to bounce house and giant slide. The Centaurs’ "Mustang Sally" had little ones moving to the music and adults swaying. Louis the Magician performed at 1 p.m. and 2:15 p.m.

Donations from the annual chili cook-off benefited the Vienna Volunteer Fire Department. As is tradition, Vienna American Legion Post 180 hosted a beer tent and sold pizza and hot dogs. An assortment of miscellaneous food vendors offered a variety of treats from ice cream to crabcakes.

Vendors featured jewelry, clothing, gift items and services. There was a smaller number of classic autos this year, disappointing some of the festival-goers.

Families – and pets – found respite in the shade, nibbling on snack food and drinking plenty of water. The heat didn’t deter many from strolling and listening to the music, though.

"We come every year," said Leonard Beckford of McLean, pulling his two festively-dressed children in a wagon. "It’s a community event."