Two neighborhoods to face off.

Herndon — This month, two Herndon neighborhoods will be facing off in a "Battle of the Bottles," to see who can recycle more by weight. Hastings Hunt, located off Dranesville Road south of Leesburg Pike and McNair Farms Landbay2, located off Fox Mill Road, will do battle throughout July. 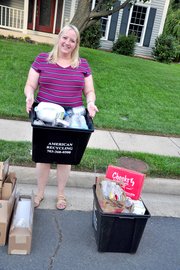 Susan Bayliss, a resident of Hastings Hunt, prepares her recycling for pickup this week. Hastings Hunt and McNair Farms Landbay2 will compete for who can recycle the most during the month of July, in a competition hosted by the Herndon Environmental Network.

The initiative is being hosted by the Herndon Environmental Network, which formed earlier this year, and in coordination with American Disposal Services, which does the trash and recycling pickups for both neighborhoods.

"We’ve been thinking about something like this for some time, we thought it would be fun to involve neighborhoods in a competition involving recycling," said Carlin Anderson, president of HEN. "It’s a way to raise awareness about recycling, especially what can and can’t be recycled, and to encourage greater participation in recycling around the area."

AMERICAN DISPOSAL SERVICES will be tallying the results, weighing the percentage of recycled materials against the total trash weight, and the winner will receive $500 gift certificate for Meadows Farms Nurseries, another business involved with the event.

"Since the neighborhoods are different sizes, with 423 homes in Hastings Hunt and 264 in McNair Farms, we thought percentage would be the only way to properly gauge who has been recycling more," said Amanda Busey with American Disposal Services. "We measured throughout June to set baselines, and we’ll see whose percentage of recycled material goes up the most."

Busey said they are always looking at marketing initiatives to increase recycling awareness, so this was a natural fit for them.

"We’re big on education, but the hardest part is getting information out to the neighborhoods, and this helps out a lot with that," she said.

Anderson said HEN members walked around to the almost 700 homes to pass out fliers, educational materials and other information for the competition. Some residents, even those who were consistent recyclers, have already learned a few things.

"We’re heavy recyclers, but since being a part of this competition, we’ve done a total re-evaluation of how we do it," said Susan Bayliss, who lives in Hastings Hunt. "Finding out that you can’t recycle Styrofoam was my ‘ah-ha!’ moment. We’ve always done cans and bottles, but I also leaned we’re able to recycle junk mail, phone books and flat cardboard, like cereal boxes."

BAYLISS says her family has already started to get creative with finding things to recycle and that they plan to do a big cleanup of their home office and recycle all the paper there.

Anderson said the money will be used for neighborhoods to purchase plants, trees, flowers, shrubbery or anything else to beautify their neighborhoods. She said she is hoping to hear from residents about ideas to spend the money, so it can be used most efficiently, rather than just sent to the homeowners association management company.

She also said the Herndon Environmental Network hopes to use this month’s competition as a jumping off point.

"We’re hoping this serves as a pilot program, especially for the Town of Herndon. Both neighborhoods are technically outside the town borders, so we’d like to eventually get something town-wide going. I think there’s a lot of potential to replicate this on a bigger scale," Anderson said. "We’ve been really pleased with the support from local businesses, American Disposal Services and Meadows Farms, they liked our ideas and were very willing to work with us."

More information on the Herndon Environmental Network can be found at www.herndonenvironment.com.