Jackson Moves On from McLean
Votes

Jackson Moves On from McLean

McLean — After five years at McLean High School, Dr. Deborah Jackson left her position as principal July 2 to take a new position within Fairfax County Public Schools. Jackson, who is a member of the McLean Rotary Club, was cited by parents and many organizations for her commitment to the school and the community surrounding it. 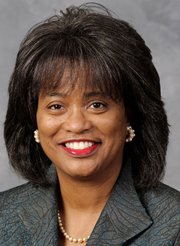 Dr. Deborah Jackson, who served as principal of McLean High School for the past five years, has announced she will move on to a position with the county office.

"Her accomplishments during her tenure at McLean, such as the establishment of the McLeadership program, the numerous awards for the arts and publications, and the academic success, exemplify her commitment to excellence in students and faculty alike," said Loretta D’Ermes, president of the McLean High School PTSA. "She genuinely cared about her students, and her willingness to draw on personal parenting experiences was invaluable. She is leaving us with a very strong community and for that I thank her."

Jackson will be working as a Special Project Administrator to develop district-wide assessments with the county school office.

"My tenure at McLean HS has taught me the true meaning of community support for public education. I have been impressed with every aspect of the quality of the students, the school and our community," Jackson wrote in a letter to parents announcing her departure. "I am extremely proud of the work we accomplished during my five years in the ‘Principal’s Office.’ Building on the Highlander legacy, we have been steadfast in our mission of providing a high quality education for all students."

JACKSON was also well connected to local organizations such as the Safe Community Coalition, which serves the McLean High School pyramid, among others.

"Her belief in a strong community has been reflected in all of her actions – before, during and after school hours. Her support in many of the Safe Community Coalition’s programs was greatly appreciated and we owe much of our success to her active participation," she said. "We will miss our near daily interactions but are confident that all of Fairfax County will greatly benefit due to Dr. Jackson’s steadfast dedication to youth development."

Jackson is also remembered for her hands-on approach, with many parents remembering specific events that Jackson not only attended, but also participated in.

"She bundled in a heavy coat at chilly football games, danced with students to raise funds for Stop Hunger Now, cheered our athletes to district championships, and dressed in costume for Multicultural Night," said MaryAnn Lastova, former president of the McLean PTSA. "Dr. Jackson is well known for attending almost every event the school had, running between programs scheduled on the same night."

"She was in the wrestling room doing the Cupid Shuffle and having the time of her life. She was so well integrated with the students, but very respected," she said. "It was always fun to watch her energy when interacting with the kids."

"Her nickname ‘Nana’ summed up how she ran the school - as if the students were her grandkids. She wanted the best for them, academically, socially, and civically. And she achieved her motto, ‘Making dreams real,’ by equipping many students and staff with the skills and mindset to accomplish their dreams. We will miss her."

Jackson, a resident of McLean, says she hopes to maintain her ties with the community.

"My new position will keep me connected to McLean High School, and I will continue to support this community," she said. "As I look back on the past five years with fond memories, I know that I will always be part of the Highlander Family."

Marty Smith, Cluster One Assistant Superintendent, said that Paul Jones, who retired as an assistant principal from McLean High School, will serve as acting principal. Jones has served as acting principal of 10 high schools and middle schools since his retirement.

Smith also said the county is welcoming input on the leadership characteristics, skills and experience on the new principal, as well as any challenges that the new principal is expected to address. Ideas can be emailed to elisabeth.boivin@fcps.edu (preferred) or sent to Beth Boivin, FCPS Department of Human Resources, 8115 Gatehouse Road, Falls Church, VA, 2204