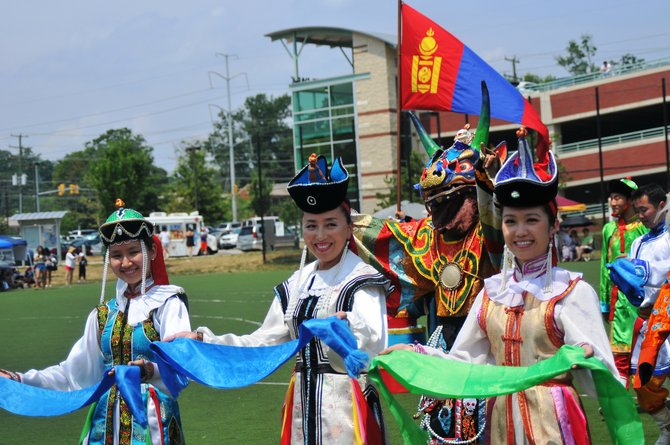 Tsolmon Uramchimeg leads her traditional dancers around the field in parade. Photo by Louise Krafft.

The Mongolian community in Arlington celebrated 91 years of independence from Manchurian rule on Sunday, July 8 at Barcroft Park. The celebration, known as Naadam, highlights traditional Mongolian culture through the three games of archery, horse back riding, and wrestling. 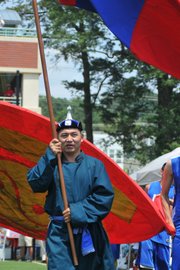 The Mongolian community in Arlington celebrated 91 years of independence from Manchurian rule on Sunday, July 8 at Barcroft Park. The celebration, known as Naadam, highlights traditional Mongolian culture through the three games of archery, horse back riding, and wrestling.

“The three manly games are symbols of the Mongolian state,” said Iveelt Tsog, a member of the board with the Washington D.C. Area Mongolian Community Organization. “We demonstrate strength and agility to celebrate our Independence Day.”

“Traditional Mongolian wrestling is intricate; the bigger and more powerful do not always win.”

Due to practical limitations, not all of the games are feasible in Arlington. Archery is not something organizers were able to entertain this year, nor was horse racing a possibility. Mongolian wrestling, however, was front and center and boasted 32 participants this year.

The rules for Mongolian wrestling are simple: the first person to touch the ground loses. Coming out on top as the winner, however, takes skill, as wrestlers are interlocked with each other from the beginning.

“Traditional Mongolian wrestling is intricate; the bigger and more powerful do not always win,” said Tsog. “You grapple and force each other to lose balance, you also depend on your opponent’s support.”

Mongolian wrestling matches are not timed, and the full event often takes several hours. High-ranking champions from previous years select their opponents, which places beginners at a disadvantage. In Mongolian wrestling the most skilled players compete amongst each other last, extending the enjoyment of the crowd.

Although it is an honor to participate in the wrestling matches, only the victor is permitted to showcase his manliness by holding an eagle posture, with arms pointed out like wings, while parading the field.

Second place finisher Ugi Khishignyam, who arrived from Mongolia last year, made a strong showing, and looks to compete again in the future. “It was my first competition, and I still came in second place,” said Khishignyam. “It feels good but I’m going to practice, and I’m going to win next year.”

Other Naadam activities included Mongolian dancing, music, and shamanist costumes. Traditional Mongolian fare was also popular with the crowd, as some waited in line for an hour to eat huushuur, a pancake with meat filling.

“It’s traditional to eat for Naadam, traditional food is the one great reason to come,” said Muugi Tseyeljay, a Mongolian who recently completed his U.S. citizenship interview.

While the heat soared into the triple digits during the festivities on Sunday, organizers were quick to note the July celebration is a point of pride for the Mongolian community. “It’s an annual event, and there’s a lot of pride to participate,” said Tsog. “It’s wonderful to showcase our culture and be a part of Arlington.”