“I like to be part of the greater good that is going on.” 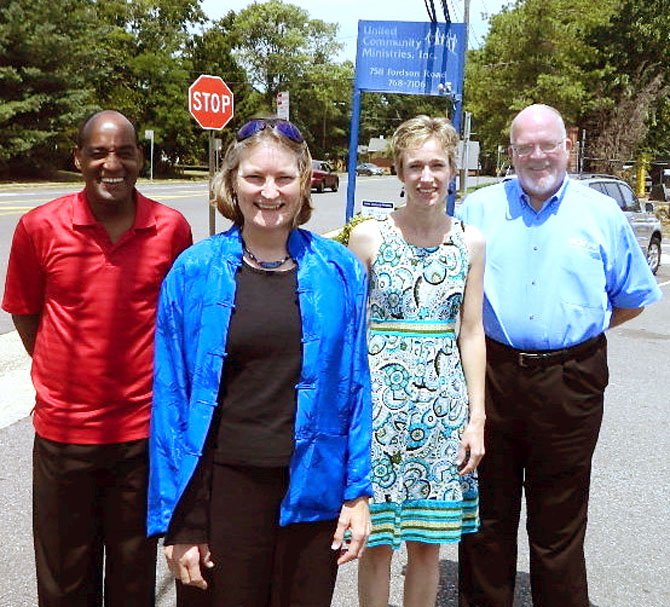 Shirley Marshall is flanked by some of her staff: Terry Bibbs (left), director of human resources, Niki Wanner, director of development and communications, and Herb Lea, director of community programs.

Mount Vernon — Adventuresome, compassionate and fond of a challenge, Shirley Marshall has stepped forward to lead United Community Ministries as it struggles to find adequate funding during the recession and while the numbers of the poor continue to grow.

“I really like building community,” she said. “I like to be part of the greater good that is going on.” 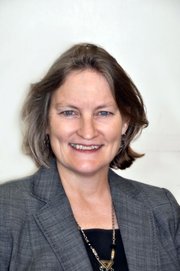 As UCM’s new executive director, she is replacing Cynthia Hull, known for her effective and charismatic leadership, whose untimely passing in March from cancer stunned UCM. “We honor her life by continuing to ensure that essential services are available to families in need,” she said.

Those essential services include emergency food, emergency funds for rent and utilities, housing assistance for the struggling and homeless, employment assistance, low-income community development, advocacy, after-school youth services and developmental daycare and education for the working poor. The largest provider of human services in Fairfax County, UCM is headquartered on Fordson Road in Hybla Valley. Its daycare, community centers, job center and thrift store are close by.

A number of “extremely qualified” candidates applied for the position, said Douglas Kennett, president of UCM’s board of directors. “With Shirley we are blessed with the perfect fit of qualifications, education, passion, experience and local knowledge.”

Marshall’s adventuresome streak and willingness to take on big challenges showed up early in her career when just out of high school she upped and enlisted in the Air Force. Her father, Col. Donald Marshall, who instilled in her the desire to serve her country, had urged her to join the Marines.

But the Air Force, impressed with her intellect, sent her to the Defense Language Institute and she spent her four years service translating Russian to English. The Air Force made her a noncommissioned officer, promoting her to sergeant.

After her military service, she traveled, then enrolled at The University of Virginia where her undergraduate work focused on Africa and the poor and marginalized.

“Then in my off-time I started working with essentially a similar population but in America,” she said of her volunteer work with a housing program. It opened her eyes.

“I was raised in middle class America and I’d never really seen the real poverty that exists right here in our backyard.”

After graduating, she set her cap at making a big dent in American poverty and looked for a job in nonprofit housing. Manna, a housing program in Washington, D.C., was quick to hire her. While working at Manna, she became acquainted with Keary Kincannon, then a young community organizer in Columbia Heights and now pastor of Rising Hope Mission Church, which is also devoted to the needy, located a couple miles south of UCM on Route 1.

But at Manna, Marshall found herself frustrated by lawyers who claimed she couldn’t do things that she knew the agency ought to be able to do. Nor could she get them to adequately explain themselves. So she decided the best way to advance her personal campaign at combating poverty was to go to law school, which she did, again at UVa.

Upon her graduation, Good Shepherd Housing and Family Services brought her on as director. She served nine years.

“With Shirley’s experience at Good Shepherd, we can be confident her leadership will move UCM forward,” said UCM’s past president of the board of directors Joe Canny.

At the end of those nine years, she said, “I felt they needed new leadership and felt I needed a new challenge.” She was also again feeling the tug of adventure. Her husband, John Hardies, who works for USAID, was headed to Afghanistan and she wanted to go too.

She soon found herself in Kabul where she took on a number of jobs, including as a photographer for a program preparing women to serve in the Afghan parliament. The determination of those women made a big impression on her.

Returning to the Washington area after a year, she was named director of Nonprofit NoVA, an alliance of 100 nonprofits in the Northern Virginia area. When Nonprofit NoVA was consolidated under the Greater Washington Roundtable, her position was phased out and she was again looking for a challenge. About this time, the position at UCM opened up.

Serving as executive director at UCM certainly presents formidable challenges. A big chunk of their funding provided by Freddie Mac and Fannie Mae is being eliminated. “That’s a lot of money we’re going to have to replace,” she said.

But she doesn’t consider that her biggest problem.

“The greatest challenge is getting the broader community of new people especially who’ve moved in to see the groups that are already here working and get them involved with them. And it’s not just UCM. It’s New Hope Housing, Good Shepherd Housing, Progresso. There’s a lot of great organizations here and we need to get the community more involved with them. The challenge is how do you reach them.”

Among other sources of volunteers she intends to tap Fort Belvoir. “Military people are fascinating to me. When I was at Good Shepherd Housing, a lot of the volunteers were military people.”

“They’re part of the fabric of our community, and when you have holes in fabric, they don’t just limit themselves to that first little area. You start to get bigger holes, more and more instability and pretty soon you don’t have fabric to use. So you have to care, you need to care about your neighbors.”