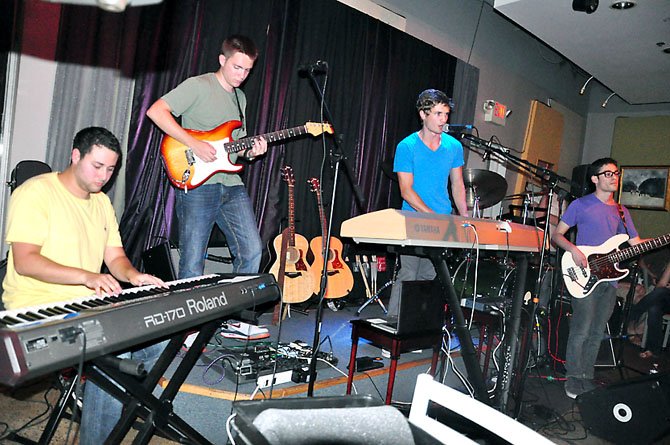 From left, Xander Green, Matt Brown, A.J. Smith and Lloyd Kikoler perform at Cafe Montmartre in Reston Friday, July 13. Smith, a Herndon native, was recently awarded a scholarship at NYU, where he is a junior, for his songwriting. Photo by Alex McVeigh.

A few months ago, AJ Smith, a junior at NYU got an email from a professor asking him to stop by his office. As a student studying Music Composition, the Herndon native thought it might be some news about his songwriting workshop.

"I sort of threw on some clothes and headed to his office, and that’s when I got the news," Smith said. "And that’s when I found out I had received the 2012 NYU Steinhardt/Songwriters Hall of Fame Scholar of the Year." 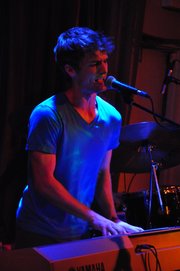 A.J. Smith, a Herndon native, performs at Cafe Montmartre at Lake Anne Friday, July 13. Smith was recently awarded a scholarship at NYU for his songwriting.

Smith, a multi-instrumentalist and singer who won the school’s Ultra Violet Live competition last year, has been expanding his musical reach since attending NYU, and returned to Reston to play his first hometown show at Café Montmartre at Lake Anne Friday, July 13.

Smith writes most of the group’s music, and spent the past year expanding his songwriting horizons. After taking a graduate level songwriting class (as a junior, he was the only underclassman), he approached his professor about taking the class again.

While he wasn’t allowed to, his professor did allow him to become a Teacher’s Assistant, and he will be one of the first students at NYU’s songwriting master’s program.

"I think I’ll be sort of the guinea pig, finding out how to develop the program," said Smith, who hopes to begin graduate school in the Spring of 2013.

"It’s been fun watching him grow up from playing around on the piano to getting a scholarship from the Songwriter’s Hall of Fame," his sister Sarah Smith said. "He’s creating music that’s so mature, and speaks to such a large population, because he’s able to convey so many emotions successfully." 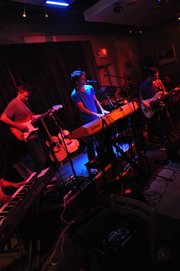 From left, Matt Brown, A.J. Smith and Lloyd Kikoler perform at Cafe Montmartre in Reston Friday, July 13. Smith is a Herndon native and junior at NYU.

AFTER LINING UP THE GIG, the group had to make their way to Northern Virginia. Green, Brown and Kikoler drove down from New York City, while Jorgensen flew in from Omaha, Neb., where he lives. The group came to stay at Smith’s house and spent 12-14 hours a day playing together in preparation for the Lake Anne show.

"We’ve been on a pretty tight time constraint, working on a whole bunch of songs over the past two days," Brown said. "But we look at this show as a stepping stone, and as music majors, I think we’ve all got the skill sets to be able to learn a large repertoire. It’s good practice."

While Smith writes the lyrics ("They make or break the song," he says) and basic chords for the group, he brings the songs to the rest of the group to work out their parts.

"A.J.’s music leaves a lot of it up to the individual members, he doesn’t hand out sheet music for each part, we work much more organically," Green said.

Smith says the group isn’t often critical of each other, they’re more "self-critical" when it comes to fleshing out the individual parts of a song.

Each member of the group is well schooled in music theory, though they come from different backgrounds. Green has more of a Broadway and musical background, Jorgensen studied jazz and Brown has worked as a freelance guitarist in the city for Broadway and off-Broadway shows, and has a jazz background.

"Jazz is definitely at our foundation. It’s an art form that you have to dig into and stay emotionally and spiritually invested in," said Jorgensen, whose nickname is "Brushes" due to his use of wire brushes in his play.

Jorgensen and Brown met when they were teamed up to play a jazz standard, and Brown said he was immediately struck by Jorgensen’s skills.

Soon Green needed a drummer for a recital and approached Jorgensen to play. Soon the quintet was jamming in each others’ apartments in their spare time, and found a chemistry developed both musically and personally.

"I think our friendship has really formed a strong foundation for our music," Jorgensen said.

From right, A.J. Smith, of Herndon and Matt Brown play together onstage at Cafe Montmartre in Reston Friday, July 13.

During the sound check for their gig at Café Montmartre the sound technician commented how they sounded like they had been playing together for years, unaware that it hadn’t been nearly that long.

Sarah Smith, who will head to William and Mary in the fall, is a skilled singer as well, and she performed an acoustic song with the group Friday.

"They’ve been practicing hard for the past few days at my house, and I’ve really enjoyed having some of the best musicians I’ve ever heard playing right under my roof," Sarah Smith said. "I haven’t even listened to the radio, just them practicing."

All the group members said they were blown away with the hospitality of the Smith house.

"There are a lot of kids that want to go into music, but it’s one of the most thankless jobs with such astronomically low odds of success," Brown said. "But their family has been so supportive, his mom is making us food, his sister is hanging out and singing with us, it’s been great."

While the group isn’t necessarily dreaming of packed stadiums and platinum albums (though they certainly aren’t against the notion), they’re more focused on being able to make music together for as long as they can.

"Buddy Rich, one of the best drummers to ever have lived, once said that as soon as he felt satisfied with his music, he would lay down his drumsticks forever," Jorgensen said. "And that’s how we approach things. If you’re rooted in your craft, and always ready to learn and to grow, you’re never satisfied. We’re always striving to play our best show, because we haven’t had it yet."

THE SHOW AT CAFÉ MONTMARTRE showed off the group’s versatility, as they played a variety of original songs. Smith’s vocal range was also on full display during their cover medley, as he was able to capture the grittier rap vibe of Eminem’s "Lose Yourself" just minutes before segueing into pop territory with songs such as Train’s "Drops of Jupiter."

The group records all their live shows and uses them to build on.

"Sometimes they’ll come out as usable takes, and we can mix and master them, but even if we can’t, it’s the best way to hear how we sound," Brown said. "Sometimes you think something sounds awful from stage, but then it sounds good on the tape, or vice-versa."

The group hopes to rehearse and play more shows together once they all get back to New York, and possibly embark on a tour of some kind.

More information on Smith can be found at www.ajsmithmusic.com.