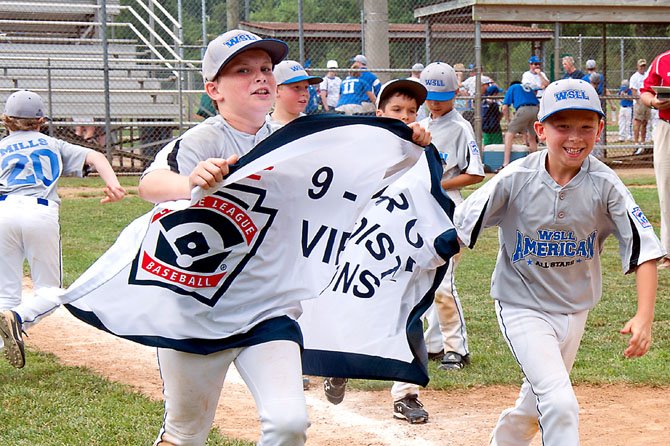 West Springfield Little League continues to be a Northern Virginia baseball powerhouse by sending two teams to the state championships this year. The 10-11-year-old American All-Star team, coached by Greg McIntyre, and the 9-10-year-old American All-star team, coached by Bryan Holzemer, both won the district championship title for their age groups. WSLL is no stranger to titles: the league has sent dozens of teams to state championships in the past 30 years. Unique to this year, though, is that four of the six WSLL teams won trophies by placing first or second in District 9 of the Virginia Little League.

After starting the district playoffs with a 5-1 loss to Fort Hunt, the 9-10 American team was considered an underdog and fought back from the loser’s bracket. They had their toughest games early with Dumfries/Triangle/Quantico, Woodbridge and Fort Hunt, which set them up for the district championship against the WSLL National team with drive and a lot of hard-knocks on-the-field learning.

They won the first of two finals games in extra innings with an 8-7 win, then an astonishing 14-3 win in the final game, shutting down the game by the top of the fourth inning.

"It’s bittersweet to win like this against fellow WSLL teammates," coach Holzemer said. "We’re a community in the West Springfield Little League and want all our boys to be rewarded for their love of this game."

The umpires for the final Saturday game, including one Little League World Series umpire from 2011, said that he was amazed at this tournament play and "what the coaches did with both of these teams ... making them truly outstanding players."

These WSLL boys — both the American and National All-Star teams — played their hearts out and were both awarded trophies, first and second place, respectively. The WSLL 10-11-year-old American and National teams did the same by also taking first and second place in the district. With these four gets, WSLL scored four of the six possible trophies for the entire district.

"It takes a league to build these boys into young men," Holzemer said. "I am honored for the opportunity to coach these all-star boys this past month, but it took all of our regular season coaches to develop their talent to get to this level."

Both teams leave this week for the Virginia state tournament. McIntyre’s team heads for the Tidewater area and Holzemer’s team heads to Ashburn.