11 years since the last title for this age group. 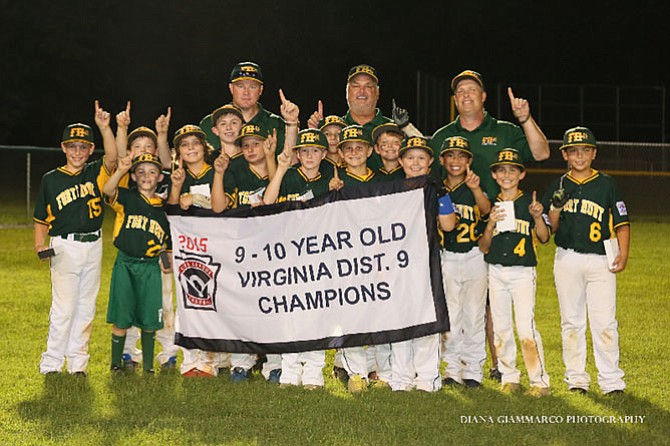 Mount Vernon — It’s two hours before the District 9 Championship game and Head Coach Terry Trenchard is going for a swim. Overheated and sweaty from throwing batting practice to his 10-year-old Fort Hunt all-star team in the July heat, Trenchard takes a dip to cool off before the big game. It is a pregame ritual he developed coaching his son’s all-star team in 2004, the last time a Fort Hunt All-Star team won the district championship for this age group.

Now in 2015, Trenchard has a new group of 10-year-olds, who have steamrolled themselves through the District 9 Little League Baseball Championship and will now travel to Newport News to compete in the state tournament.

The state tournament bid comes after a dominating performance in the district tournament where Fort Hunt outscored their opponents 74-7, concluding with a 7-2 victory against West Springfield National Little League in the championship game on July 10. Fort Hunt showed a rare combination of powerful offense, strong defense and lights out pitching in the tournament. However even after their dominating offensive performance in the district tournament, Trenchard believes the team’s strength is its defense.

“All the other coaches said we had the best defense they had ever seen,” said Trenchard. “Our team is full of good athletes who have high baseball I.Q. and everyone knows their role.”

Trenchard emphasized the way they practice allows them to be best prepared for games.

“There are a lot of repetitions in practice. We work on every scenario so there is no surprises when the games come.”

In the championship game Fort Hunt was ready to play from the first pitch — literally as the first six batters all made contact on the first pitch they saw. Jake Gupton, the team’s leading hitter in the tournament, batting a .636, started things off with a single and on a heads-up move, advanced to second on a bad throw back into the infield. Kyle Pilc followed him with a single of his own, putting runners on the corners. Gupton would later come around to score on a fielder’s choice to give Fort Hunt the early lead.

In the second, Fort Hunt would rally again, and again it was Gupton who did the damage. With Bennett Zippel and Will Sharp on-base, Gupton crushed a triple in the gap, scoring both Zippel and Sharp. Gupton later scored on Pilc’s second hit of the game.

Fort Hunt showed the power in the third when Ryan Conmy crushed his second homerun of the tournament. Conmy was the team’s leading run producer, driving in 13 runs throughout the tournament, while scoring 10 runs of his own. After the team scored two more runs on a pass ball and error by West Springfield, Fort Hunt now had a commanding 7-0 lead with their ace, Nathan DeWitte on the mound.

Fort Hunt would have to evade one more West Springfield rally in the fifth. With the score now 7-2 and the bases loaded, Conmy came into pitch trying to close to door. Conmy got out of the bases loaded jam with a little help from his defense and in the sixth inning, struck out the side to clinch the title.

The last time Fort Hunt had won at this division these youngsters had yet to be born. In 2004, Trenchard coached a 10-year-old all-star team with his son on it that won the district championship for the first time in Fort Hunt history. Trenchard can’t help call attention to the similarities of the two teams.

“We have a special group of athletes just like in 2004,” said Trenchard. “We don’t have any standout players, everybody can play and knows baseball, which is the way we won [in 2004]. I would say that this team’s pitching is deeper.”

Fort Hunt will look to continue its dominance into the state tournament. With a team batting average of .423 and a team ERA of 1.29, Fort Hunt will be a force to be reckoned with at states.

“It’s going to be tough,” said Trenchard. “We’re in a tough pool, whoever comes out of our pool will have a great shot to win it all. You need to have a lot of pitching to win and I think we have enough pitching.”