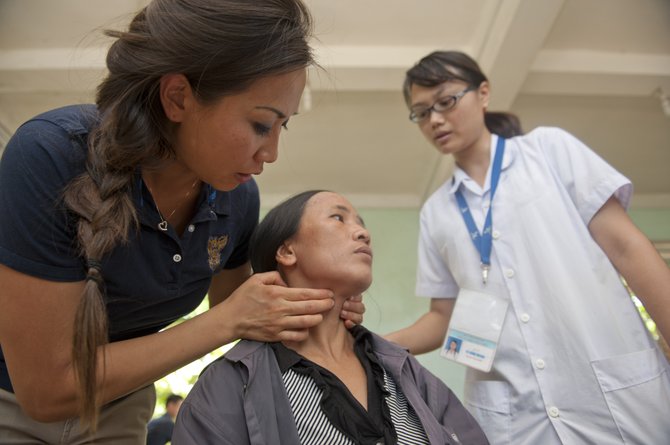 Nguyen, a Lt. Cmdr. and dermatologist, recently provided medical treatment at the medical civic action project at Hung Lam Primary School in Nghe An province. Combining her medical training with her ability to speak the native language, Nguyen serves as a force multiplier in helping communicate, teach and treat Vietnamese patients.

"I volunteered for this mission," said Nguyen. "I wanted to serve and thought I could help the medical team. I also wanted to help those who come from the same heritage as me and bring together the Vietnamese and Americans during this humanitarian and civic assistance mission."

While at the Hung Lam MEDCAP, a patient was referred to Nguyen for a diffuse rash on his abdomen.

"It’s exciting to be able to come to a new place and practice skills that were learned in the U.S," Nguyen said. "As a doctor, educating a patient about behavioral modifications can have an impact on the quality of life, considering the skin is the largest organ in the body."

NGUYEN SERVED a number of patients at Hung LAM, both young and old.

"I have much respect for the elders and hope that one day the children live a life of service," she said. "There is something to be said about a changed attitude when you’re a part of a humanitarian and civic assistance mission and the fact that there are others that may be suffering more than you. It truly is a life experience."

Nguyen said participating in PP12 is a humbling experience.

"It’s a big responsibility and an honor," said Nguyen. "I wanted to be a part of the process of bringing people together and bridging cultural gaps, whether it is something that’s lost in translation or being able to represent the United States when providing care for others. If I can even make a small improvement, I will feel I served the PP12 mission well."

PP12 personnel were in Vietnam until July 24 to provide no-cost medical, dental, optometry, and veterinary care, as well civil engineering projects throughout the Hung Nguyen district.

Now in its seventh year, Pacific Partnership is the largest annual humanitarian and civic assistance mission in the Asia-Pacific region that brings together U.S. military, host and partner nations, non-governmental organizations and international agencies, and is designed to build stronger relationships and disaster response capabilities.

NGUYEN ATTENDED Thomas Jefferson High School for Science and Technology prior to attending and graduating from the Naval Academy in 1999. Immediately following graduation, she entered medical school at Stanford University under the Navy’s Health Professional Scholarship Program.

In 2003, Nguyen graduated from Stanford University School of Medicine and completed her internship at the Walter Reed National Military Medical Center in Bethesda, Md. She was then forward deployed to Atsugi, Japan and assigned to Carrier Air Wing Five as a staff medical officer. Returning from Japan, she completed her residency in dermatology at the University of Pennsylvania in 2010. Nguyen, a qualified naval flight surgeon and surface warfare medical officer, is currently assigned to Walter Reed National Military Medical Center and concurrently serves as a staff dermatologist and the director of medical student accessions for the Navy Bureau of Medicine and Surgery.