After Years of Construction, a New Jones Point Park Emerges from Orange Cones

Southernmost point of the District of Columbia gets a makeover.

The Mount Vernon Trail crosses with a nature path under the Woodrow Wilson Bridge at Jones Point Park. Photo by Michael Lee Pope. 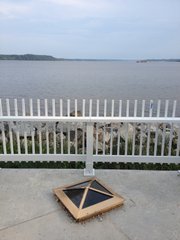 The first boundary marker for the District of Columbia, which was originally placed here in 1791 with a Masonic ritual involving corn, wine, oil and trowels.

Jones Point Park used to be a place for walking dogs and fishing in the Potomac River. Then the project to build a new Woodrow Wilson Bridge turned the park into a massive staging ground. Even when the bridge was completed and the old one was demolished, the park remained under construction. Now, after more than a decade hidden behind a veil of orange cones, Jones Point Park is ready to once again take its place among the premier city parks. Visitors can lumber like a bear, learn about shipbuilding and visit the original cornerstone of the District of Columbia.

“There’s so much more to do now than there was before,” said Jack Browand, division chief of the waterfront for the Alexandria Department of Recreation, Parks and Cultural Activities. “It’s very exciting.”

The history of Jones Point Park goes back to the end of the Ice Age, when American Indians began coming here for food, tools and supplies. Small groups of native peoples left their inland villages in the spring to establish hunting and fishing camps on Jones Point. When the Europeans arrived, Stafford County planter John Alexander arranged tenant farmers and crews of enslaved African Americans to work the farm. At the end of the 17th century, the land where the park is now located was beginning to change.

“By this time, many of the Algonquians who had lived so long in the Alexandria area were there no longer,” wrote historian Ted Pulliam. “Diseases they contracted from contact with European traders and settlers to which they had no immunity took a significant toll.”

BUT JONES POINT would not retain its pastoral calm for long. During the Revolutionary War, rebel forces placed cannons at Jones Point because of its strategic location along the Potomac River. After the war, when the federal government was looking for a permanent seat of government, surveyors descended on the site to create the original District of Columbia. The first boundary marker for the new District was laid in an elaborate Masonic ceremony with corn, wine, oil and trowels in 1791.

“May this stone long commemorate the goodness of God in those uncommon events which have given America a name among the nations.,” said James Muir, offering a blessing during the ceremony. “Under this stone, may jealousy and selfishness be forever buried.”

Half a century later, the federal government decided that Jones Point would be an ideal place for a lighthouse to help guide ships along the Potomac River. The lighthouse, which was constructed adjacent to the District boundary marker, began operation in 1856. It was one of the first lighthouses to combine the beacon and keeper’s house into a single structure. For many years, this was the home of Benjamin Potter Greenwood, who would host visitors from near and far.

“They would occasionally partake in a hand or two of poker,” according to one contemporaneous account, and finish off the visit with a bit of Maryland rye or Virginia corn.”

By the beginning of the 20th century, war fever broke out at Jones Pont Park. The Army Corps of Engineers filled the cove and created 46.5 acres of new land for government’s use. When the United States joined World War I, the Virginia Shipbuilding Corporation used the new land to construct an enormous federal shipyard — one of 111 built to aid the war effort. The facility, which was constructed in a breakneck pace of 85 days, had 7,000 workers. It had two craneways servicing four shipways, a blacksmith shop, a boiler shop and an extensive network of rail lines.

“The history of shipbuilding here has been largely forgotten,” said City Archeologist Pam Cressey. “That’s one of the things that so exciting about the design of the park because it emphasis this lost history.”