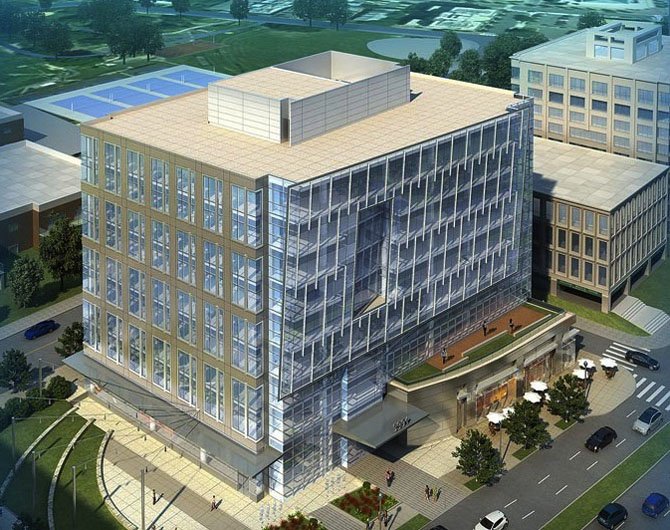 In exchange for bonus density at the Arlington Funeral Home site in Ballston, a developer is building a new theater for Arlington. Photo Contributed

When the Arlington County Board approved a new nine-story mixed-use commercial building in Virginia Square earlier this year, it was a deal that seemed too good to be true. Herndon-based developer Crimson Partners would construct a $3.7 million “black box” theater with seating for 150 people in exchange for $1.3 million worth of bonus density. The community would get an amenity identified in its sector plan, and the developer would get to build a larger building. But now that the project is moving forward, some are starting to wonder about whether or not the black box would become a black hole.

"The wider Arlington community does have some concerns about the financial stability and viability of this theater," said James Schroll, president of the Ballston-Virginia Square Civic Association, adding that the association is in support of the project. "We want to see the black box theater in Virginia Square that can thrive."

Budget documents show that the county spends $3 million a year on the Rosslyn cultural center known as Artisphere, which takes in about $1.5 million in revenue. Ballston residents are concerned that the new 13,000-square-foot theater proposed in Virginia Square would be a similar burden. Although the main use of the new facility would be for theatrical productions, the list of allowed uses includes events, conferences, religious uses and civic events. County officials say the ancillary uses will not inhibit the theater’s revenue potential. Some aren’t so sure.

“Instead of a black box theater, this is a financial black hole theater,” said Robert Atkins during the public hearing. “This will be a net loss as opposed to a net benefit.”

FOR MANY YEARS, the site has been home to the Arlington Funeral Home, which has now moved to a different location. Recent years have seen a number of proposals for the site, although none of them came to fruition. Back in 2004, the County Board approved a project for the site. But that never happened. Then, in 2007, elected officials approved an amended version of the project, known as “The Club on Quincy.” But the Florida-based developer went bankrupt in 2008, and the development never happened. Now county officials are hoping that the current proposal might finally transform the block into a more urban landscape.

“Hopefully, this time is the charm,” County Board member Walter Tejada said before the vote in January.

Even before the proposal was approved, doubts were already building about the financial viability of the theater. Planning Commissioner Charles Monfort expressed concerns when the commission considered the proposal, noting that the experience with Artisphere indicated that the county does not have a good track record in planning art facilities. Commissioner Steve Cole said it was troubling the Planning Commission was expected to advise the County Board on the proposal without first seeing a business plan. Commissioner Inta Malis noted that the theater space will be owned by the building owner and leased to the county. Commissioner Terry Savela suggested that if Arlington-based theater groups are unable to contribute to the operating costs, the county should consider looking beyond its boundaries to other groups in the larger metropolitan area.

“The public plaza will enliven Virginia Square, and the Black Box Theater will add a significant cultural destination to this part of the Metro corridor,” said County Board Chairwoman Mary Hynes in a written statement following the vote. “This project brings us closer to realizing the community-crafted sector plan’s vision of Virginia Square as a center for arts, culture and education.”